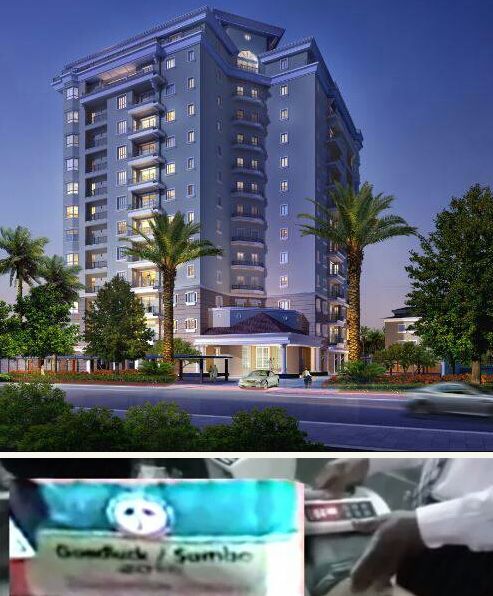 While Ayodele Oke, the DG of the Nigerian Intelligence Agency (NIA) has claimed that the $43 million, N23.2 million and £27,800 (about N15bn) cash found in an apartment in Lagos last week belongs to his agency, information available to SR suggests the woman seen hauling the money into the apartment in Ghana-Must-Go bags may have been Folashade Oke, his wife.
Investigation revealed that the owners of Apartment 7B gave Folashade Oke, with phone number +2348059833410, as their contact. Sources at the NIA confirmed Folashade to be the spouse of their Director-General, Mr. Oke.

The day after the money was discovered, Mr. Oke had told SR he could not verify any information about the money as he had not read any report linking his agency to the cash.

After pledging to speak to us thereafter, he did not take any calls until he suddenly announced that the money belonged to NIA, and that it had been approved by President Goodluck Jonathan for certain “covert” activities.

One of the whistle-blowers responsible for the discovery told SR that since he started working on the property as a guard, a woman who spoke fluent Yoruba repeatedly brought huge bags of money to Apartment 7B. That particular property was known to guards as Apartment “Dash-Dash” because in the records there were two dashes where the name of the owner ought to be.

He recalled that on two occasions, he helped the woman, who was always curiously dressed in a haggardly way, to carry the money to “Dash-Dash”. The woman, on the first occasion, gave him N10,000 as a gift, and on the second, N500.

He said the woman would spend about two hours in the apartment, then go freshen up in the gym at the back of the building before leaving.

While Mrs. Oke appears to be that person, who was quietly trying to traffic the money to the apartment for some reason, a quick check on True Caller shows phone number +2348059833410 to be customized as “Okemob Niger”.

According to the whistleblower, who is in hiding for fear of his life, there are about 19 fully occupied apartments and 2 penthouses at the 16 Osborne Road, Ikoyi, property. Estate valuers estimate each of the apartment with four bedrooms and state of the art facilities to cost about N250 million.

The building is owned by a former chairman of the Peoples Democratic Party, Ahmed Muazu, who is currently in Singapore, according to persons knowledgeable about his movement. Mr. Muazu, after initially denying ownership of the building, has now owned up.

The whistleblower said Mr. Muazu has many prominent Nigerians as apartment owners in the building. They include wealthy former Anambra State Governor, Peter Obi, who owns one on the first floor; recently-retired Managing-Director of the NNPC, Esther Ogbue, on the second; and TV personality and owner of EbonyLife TV, Mo Abudu, on the 4th.

He further told SR that Patricia, a daughter of former PDP “Mr. Fix-It” Chief Anthony Anenih, lives in Apartment 7A. That is next door to 7B, which is now claimed by the NIA as belonging to it although only one woman, the wife of its Director-General, was ever seen in the premises in a home-decorating mission to furnish the apartment with up to N13 billion in raw cash.

Further investigations show that both Apartment 7A and 7B were initially owned by former Ms. Anenih and her husband Edo-Osagie, who used a company known as Bishop Hills Enterprises Ltd to buy them from the former PDP chairman. It is unclear at what point they parted with 7B.

SR made efforts to contact Mrs. Edo-Osagie but a family source said she could not comment as her mother, Patricia Anenih, has just died. Mrs. Anenih, who had been sick for some time, died yesterday according to family sources.

The whistleblower also said there were no guards or security agents operating from within Apartment “Dash-Dash.” He maintained that apart from the woman who brought bags into the apartment, there were no occupants or operatives living or working there.

The whistleblower’s account somehow tallies with the denial of the Central Bank of Nigeria earlier today that it never sent bullion vans to take money to the apartment, as claimed by Mr. Oke.

Meanwhile, the EFCC operatives who raided the building have stated that in addition to the vast sums of money they found in various currencies, they also retrieved 2015 posters and presidential campaign paraphernalia belonging to former President Goodluck Jonathan and his then Vice President, Named Sambo at the scene.

That background may have emboldened the EFCC chairman to ignore pleas by Mr. Oke when he arrived suddenly at EFCC offices asking them to call off the raid after they already commenced.

The question now is:

How did Mrs. Oke become involved in discreetly and personally ferrying money supposedly belonging to the federal government into a private apartment she appears to own, and apparently trying to hide it there?

Meanwhile, the whistleblowers have also said they are certain that at least two other apartments in the building, which is now being watched, may also contain large sums of money.