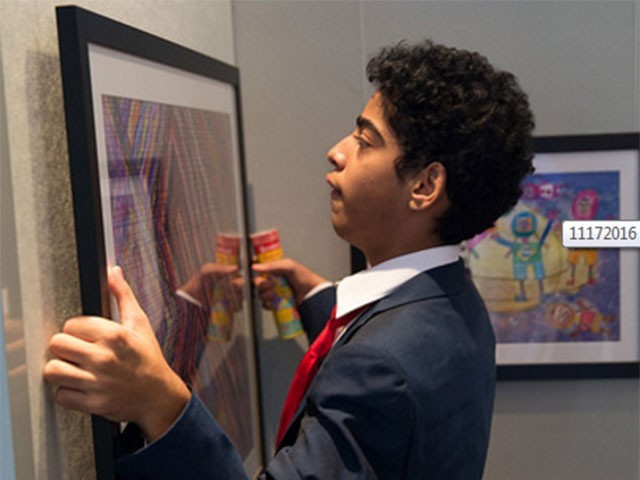 Sibtain Junejo’s artwork will remain on display until the end of December at the US Department of Education. PHOTO: US STATE DEPARTMENT OF EDUCATION

A 15-year-old Pakistani artist has been honoured at the United States Art Festival.

Sibtain Junejo, who hails from Karachi, participated in John F Kennedy Center for Performing Arts’ VSA International Art Program for Children with Disabilities, and had his artwork selected for a live exhibition in Washington DC.

“It’s heartening to see Pakistanis making waves in so many different fields,” the US Consulate General Karachi said in a post, adding that Junejo’s “artwork will remain on display until the end of December at the US Department of Education (ED) along with that of other peers from Egypt, the United Kingdom, South Korea, Saudi Arabia, Singapore, and elsewhere in the US.”

Earlier this month, a Pakistani-American doctor won the “Scientific Achievement Award 2016” from the Nato Science and Technology Organisation (STO) for his extraordinary performance in research on medical countermeasures against biological agents.

STO, the largest Nato organisation for defence science and technology, honoured Dr Rashid A Chotani, who was part of a task group researching medical countermeasures against biological agents.

Dr Chotani has worked in the healthcare industry, government and academia in areas such as advanced development of vaccines, therapeutic and diagnostic countermeasures, bio-surveillance etc. As a senior scientist, Dr Chotani has spent more than 20 years in providing bio-security and public health expertise to both public agencies and private industry.