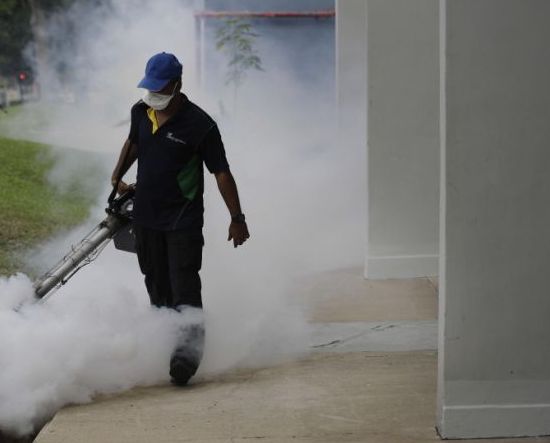 Scientists trying to predict the future path of Zika say that 2.6 billion people living in parts of Asia and Africa could be at risk of infection, based on a new analysis of travel, climate and mosquito patterns in those regions.

Some of the most vulnerable countries include India, China, the Philippines, Indonesia, Vietnam, Pakistan, Bangladesh and Nigeria according to the research.
AP reports that experts caution that the study could overestimate number of people at risk because they don’t know whether Zika had already landed in some of these countries in the past and allowed people to develop immunity. More than two-thirds of people infected with Zika never get sick, and symptoms are mild for those who do, so surveillance systems may have missed cases.

Although Zika was first identified in 1947, the virus wasn’t considered a major health threat until a major outbreak in Brazil last year revealed that Zika can lead to severe birth defects when pregnant women are infected.

In February, the World Health Organization declared the spread of Zika a global emergency, and epidemics have been sparked in at least 70 countries. In the last few weeks, it has sickened more than 100 people in Singapore and started spreading in Florida. Zika is mostly spread by a specific species of tropical mosquito, but it can also be spread by sex and through blood transfusions.

Researchers hope their new study will help officials plan ahead to possibly avoid some of the worst effects of Zika.

“For countries with a finite amount of resources, this may help them use those resources as efficiently as possible,” said Dr. Kamran Khan, an infectious diseases physician and scientist at St. Michael’s Hospital in Toronto, the study’s senior author.

To figure out where Zika might gain a future foothold, researchers examined patterns of people traveling from infected regions in the Americas to Africa and Asia and combined that with an assessment of local conditions, including mosquito populations. They used the spread of a related virus, dengue, as a model for Zika since the same mosquito species transmits both diseases. Dengue is not spread by sex, like Zika, but mosquitoes are responsible for the vast majority of Zika cases globally.

The study was published online Thursday in the journal, Lancet.

Some experts pointed out that the expected impact of Zika will depend largely on whether people have any previous exposure to the virus — and that is unknown.

“No one has ever looked, so we don’t know if there is any pre-existing immunity to the virus,” said Dr. Abraham Goorhuis of the University of Amsterdam, an author of a commentary that accompanies the Lancet study. The virus in the Americas is an Asian strain that was responsible for a large outbreak in French Polynesia and other Pacific Islands in 2013 and 2014.

“If there was broad circulation of this virus in Asia, then it could be that the risk of Zika spreading to Asia won’t be as bad as we think,” Goorhuis said. He said another big unknown was whether people who might have been exposed to the African strain of Zika might be protected once the slightly different Asian version arrives. It’s unclear how widely the original 1947 strain found in Africa may have spread.

Goorhuis also noted it was possible Zika might eventually burn itself out after about a year or so of circulation, the way a related virus, chikungunya, recently did.

Others said scientists should seize the chance now to prevent Zika virus from becoming entrenched.

Ben Neuman, a virology professor at the University of Reading, said “we have the opportunity right now to prevent (Zika’s) spread and by doing so, halting the spread of unnecessary suffering.”

Previous Ringgit likely to be lower against greenback next week
Next Malaysia's GDP Among The Best In ASEAN, Says Johari