A perfect cocktail of sweets and kites 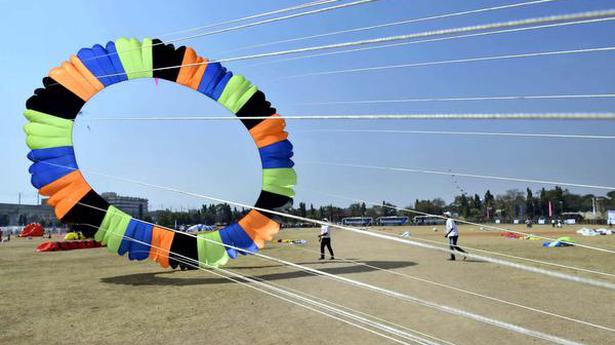 It was a sea of people at the Parade Grounds as the three-day kites and sweets festival got under way on Saturday evening. If fancy and colourful kites dotted the skies, it was the sweet aroma on the ground that wafted under the tented stalls as hundreds of women cooked home-made delights.

However, the festival became a victim of its own success as most of the stalls put up by women from Hyderabad ran out of sweets within an hour of the inaugural. Most of the visitors had to leave without savouring the sweets as the quantity brought were limited.

The visitors were only made aware of the good stuff that they missed as the labels and ingredients were still on display. Bokul pital, aval vilayichathu, sarkara varatti, laung latika, meetu pudu, lapsee and 869 other names of sweets remained on display long after they got over. For many of the visitors, the sweets and their appearance were familiarity laced with nostalgia. “Modak reminds me of home and Ganpati puja. When I saw ukadiche modak, I remembered the time when it used to be made at home,” said Ganesh Nimje, who had come with his family to the venue.

“It took me two hours to prepare green peas laddu. I made four kilos and brought it here and it got over within half an hour,” said Sunita Das, a homemaker who is a resident of Hyderabad for the past 15 years. “It was fantastic that the sweet taste of India was available under one tent on one day. We didn’t think it would be such a big hit. We had asked 1,000 participants to bring five kilos of prepared sweets thinking 5,000 kilos would be sufficient. But all the women reported brisk sales and everything got over quickly. We have asked them to prepare thrice the quantity for Sunday. Today, there were 875 sweets, but on Sunday, we are expecting 1,000 varieties of sweets,” informed Mamidi Harikrishna, Director (Culture) Telangana, who is the brain behind the festival.

Meanwhile, participants of International Kite Festival from various countries, including Singapore and Vietnam, brought large colourful kites and flew them in one part of the Parade Grounds. Many visitors to the venue brought locally-available kites and manja and flew them at a cordoned-off area.