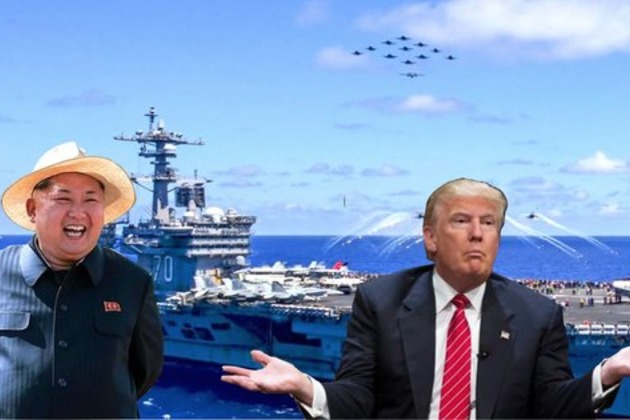 The war of words that started from that point, intensified further, leaving the region more troubled than ever.

North Korea said that the arrival of the U.S. strike group was part of a “reckless scheme” to attack it.

Much was said, and China feared that the constant sabre rattling could lead to a situation from which there could be no return.

However, more than a week has gone by and now it has been revealed that the strike group that was supposed to be steaming towards North Korea – was actually headed somewhere else.

The Carl Vinson strike group consists of a carrier air wing, two guided-missile destroyers and a cruiser and was supposed to have been ordered to sail north after leaving Singapore on April 8.

However, now the Navy has published photos showing that it was actually sailing the opposite direction through the Sunda Strait between the Indonesia islands of Sumatra and Java – which is more than 3,000 miles southwest of the Korean Peninsula and over 500 miles southeast of Singapore.

While the revelation drew many eyeballs, the U.S. finally confirmed that the USS Carl Vinson may finally be heading north.

The White House had to deal with the embarrassment of not being clear about the carrier group’s whereabouts and still making several threats to North Korea through the week.

The Trump administration has, over the last two weeks, said several times that the ships were heading north.

In a message posted on the Carl Vinson’s Facebook page addressed to “families and loved ones” of the personnel on board, Rear Admiral Jim Kilby, the commander of Carrier Strike Group One said, “Our deployment has been extended 30 days to provide a persistent presence in the waters off the Korean Peninsula.”

Admiral Harry Harris said the carrier strike group was headed north to the Western Pacific after departing Singapore on April 8.

A spokesperson for U.S. Pacific Command had even linked the move to North Korea’s “reckless, irresponsible and destabilizing program of missile tests and pursuit of a nuclear weapons capability.”

Then, Defense Secretary James Mattis said in a media statement that Carl Vinson was “on her way up there.”

On April 12, Trump said the U.S. was sending “An armada, very powerful.”

On Tuesday finally, the Pacific Command said that the strike group had completed planned military exercises and would now head north.

A U.S. Pacific Command spokesperson said in a statement, “After departing Singapore on April 8 and cancelling a scheduled port visit to Perth, the Strike Group was able to complete a curtailed period of previously scheduled training with Australia in international waters off the northwest coast of Australia. The Carl Vinson Strike Group is heading north to the Western Pacific as a prudent measure.”

According to South Korean media, the strike group is now expected to reach the Korean peninsula by April 25.

Incidentally, North Korea marks the anniversary of its army’s founding on April 25.

Rear Admiral Kilby has said, “Our mission is to reassure allies and our partners of our steadfast commitment to the Indo-Asia-Pacific region. We will continue to be the centerpiece of visible maritime deterrence, providing our national command authority with flexible deterrent options, all domain access, and a visible forward presence.”

China, that has warned that “a storm is about to break” over the divided Korean Peninsula – witnessed many stifled sniggers through the day as the news about the confusion broke out.

Many Chinese took to the social media to joke about the ‘apparent show of force by the U.S.’

One user on Weibo, China’s version of Twitter said, “American imperialism is a paper tiger.”

While another said, “The aircraft carrier was sleep-walking.”

Meanwhile, North Korea, did not directly comment on the seemingly hollow threat – but said the United States and its allies “should not mess with us.”

The Rodong Sinmun, the official newspaper of the North’s ruling Workers’ Party said, “A nuclear powered aircraft carrier that the United States and its puppet group are loudly advertising is nothing more than a pile of scrap metal in the face of our revolutionary forces’ mighty power.”