The Indonesian Military (TNI) has become increasingly obsessed with selling the idea that Indonesia is in the midst of a “proxy war”. Gen. Gatot Nurmantyo has led this charge since 2014, when he traveled around the country to speak about how Indonesia was in the middle of a proxy war. In 2015, Defense Minister Ryamizard Ryacudu joined the bandwagon, claiming that the LGBT movement is a form of proxy warfare that is even worse than a nuclear bomb. Recently, Gatot devised a media proxy war defense pact, signed by Nahdatul Ulama, the Teachers Union and the Association of Publishers.

Is a proxy war truly happening in Indonesia? Or is it just an attempt for the military – especially the Army – to regain its political relevance? With such fierce campaigning from the military and government officials, it pays to step back and revisit the concept of proxy wars and how they are waged.

In Proxy Warfare ( 2013 ), Mumford defines a proxy war as “indirect engagement in a conflict by third parties wishing to influence strategic outcome”. Proxy wars became prolific during the Cold War, when both the United States and Soviet Union realized that they would face mutually assured destruction should any conflict escalate toward a nuclear exchange, so they surreptitiously used the conflicts of smaller states to further their political objectives.

One of those proxy wars was the 1975 Angolan Civil War, where the US, Soviet Union and China with Cuba and Zaire (Democratic Republic of the Congo) provided their proxies with manpower, funding, arms, ammunition and even propaganda. In this particular case, there was enough historical evidence to show the indirect involvement of foreign interests, through local organizations, attempted to advance their respective political interests.

Another example, executed by the US prior to its involvement in World War II, was the Lend-Lease Bill enacted in March 1941, which provided then president Roosevelt the ability to aid European allies with American military equipment against fascist powers.

Some conclusions can be drawn from those historical examples. First, the notion of a proxy war would presuppose that an actual conflict is already occurring and that outside parties seek to use the conflict to advance their own political objectives. Second, proxy wars often involve larger powers, co-opting either lesser powers or non-state actors to advance a political agenda. Third, a proxy war can be waged if conventional war was deemed to be too escalatory and costly, as shown during the Cold War.

Gatot, along with Ryamizard, has identified several nodes of “proxies” that serve “invisible forces” seeking to threaten Indonesia’s integrity, such as the media, narcotics, communism, student brawls, non-government organizations (NGOs) and terrorism. It is possible for this list to get longer as the military continues to wrestle for greater relevance.

Their insistence that NGOs can be agents of proxy wars shows a lack of understanding. To qualify as a proxy, one must be interested in advancing the benefactor’s war aim, which may be to impose higher costs or aid in crippling the opposition. Within this understanding, the only viable proxy agent would be terrorism, which is a form of modern proxy warfare waged by violent non-state actors. This is especially evident in cases of lone-wolf terrorism, in which a terrorist group advances their political objective using individuals as a proxy.

Other proxy agents identified by the military are dubious. NGOs – and even international organizations – are generally against the continuation of violence, which goes against the objectives of war. NGOs are also independent of governments, making them less likely to be proxy agents of foreign powers. In Indonesia’s case, NGOs are often socially oriented, with some even acting as agents to curb social ills, such as poverty and corruption. The military’s conviction thus resembles xenophobia and fear mongering rather than rationality.

The main selling point of the proxy narrative is the ambiguity and elasticity of the concept. The secretive character of proxy wars makes it easy to pin the narrative on even the flimsiest of issues, often to the point where it can be equated with conspiracy theories.

Perhaps the most ridiculous form of proxy warfare that has been identified is against LGBT communities. Ryamizard asserts that the emergence of these communities “force Indonesia to deal with states who support the LGBT agenda under the guise of human rights observance”. How does this constitute a form of proxy warfare? There is no indication that, through LGBT communities, foreign interests are trying to create a situation that would be destabilizing, let alone threatening.

Furthermore, the statement can be interpreted as the Defense Minister considering human rights observers as viable threats to Indonesian integrity.

The ambiguity factor also provides the military with a lot of leeway to define anything they deem even slightly threatening as a form of “proxy war”. Once an issue, such as narcotics, is considered a form of proxy war and is potentially destabilizing, the military will then be justified to take action against it, using military means if possible. This would entail a greater degree of involvement of the military in civilian affairs and pose dangers to civil liberties. The first freedom that would be hurt is the freedom of speech and thought. For example, the military arrested civilians suspected to be Communists only because they were wearing t-shirts with a hammer and sickle logo. The military also confiscated books containing Communist teachings, claiming that they were aiding the police in curbing the spread of an illegal ideology.

To be fair, the threat of foreign influence trying to influence events in a country through proxies remains a possible threat to national security. In 1965, the Central Intelligence Agency was involved in staging the G30S purge. It was a bloody proxy war motivated by ideology and foreign politics, which unfortunately involved the military. Terry Russell has eloquently pointed out that in the past, Indonesia’s economy collapsed because Suharto was accepting backroom deals with the World Bank to liberalize Indonesia’s banking sector. Syailendra also points out that deeper military-civilian engagement is crucial in facing amorphous proxy wars, especially those involving ideology.

While these points illustrate the necessity of the military in safeguarding the country from foreign threats, the current “proxy hype” is a campaign that is more about the military’s lust for political power, rather than rational strategy making. It capitalizes on the inherent xenophobia that still plagues both the military and the people. Most importantly, it shines a large spotlight on the inwardness of the military, which is still Army-dominated, and Indonesian strategic thought.

The writer is a postgraduate student at the S. Rajaratnam School of International Studies (RSIS), Singapore, majoring in strategic studies. He is an alumnus of President University. His research interests are Indonesia’s defense and security policy, maritime security, civil-military relations and future warfare. He can be reached on Linkedin, by email or on his blog, Scribbles from the Ivory Tower. 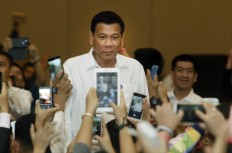 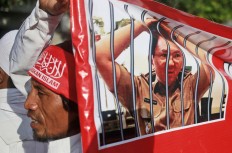