NEW DELHI: Investigators on the trail of bribe money in the AgustaWestland VVIP helicopter scam have stumbled on a Singapore based-firm with business links in India that allegedly received a chunk of funds that originated from Italy.

Gudami International Pte is among the three Singapore-based companies that investigators suspect received over 2 million, which was allegedly laundered by raising bogus invoices, in a network of companies being operated allegedly by lawyer Gautam Khaitan. Records show it has strong business interests in India.

The investigation into the Singapore-based companies is part of a probe into the scam that has gained fresh currency after an Italian court upheld that international corruption had taken place in the Euro 556—million contract, as was first reported by ET in April.

Indian investigators have been trying to piece together a money trail of the alleged 56—million bribe money, a large part of which, has been recorded as going into Mauritius-based company Interstellar. Gudami, which has been named in an enforcement directorate charge sheet on the case, is suspected to have received some part of this money from Interstellar as part of a multi-nation money transit route.

A detailed questionnaire sent by ET to Gudami, listed as a company involved in trade and freight forwarding, was not answered. ED has sent a request under mutual legal assistance treaty (MLAT) seeking details investigation against Gudami for its role in the scam. A team of investigators may soon visit Singapore to assist the authorities there.

“We have also obtained details of three Indian companies at Delhi, Mumbai and Hyderabad which were used by middlemen Christian Michel,” said a senior ED sleuth. In June, the agency seized the shares of these companies to the tune of Rs 86.07 crore. ED documents accessed by the ET shows that information about Gudami and two other Singapore firms was revealed after a forensic examination of a laptop seized during raids at Khaitan’s office. The laptop, which was operated by an employee of Khatian’s legal firm, contained several invoices raised by the three firms on Mauritius based Interstellar According to the ED, a Euro 12.4 million chunk of the alleged bribe money was transferred to Interstellar. 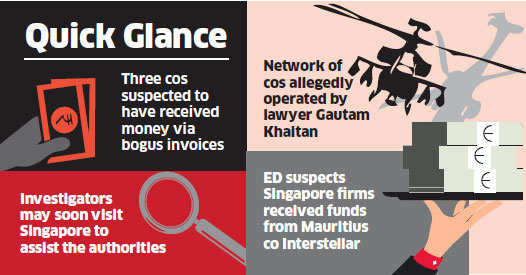 This was part of kickbacks received by middlemen Guido Haschke and Carlo Gerosa from Italian firm Finmeccanica to allegedly fix the Indian chopper deal.

ED suspects that three Singapore-based companies received funds from Interstellar, which was laundered by raising bogus invoices on the Mauritius company.