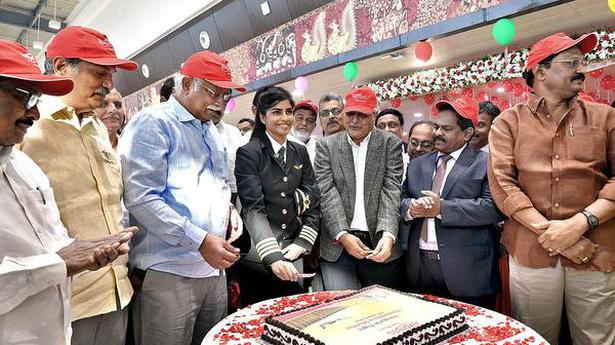 The inaugural flight IX 213 departed at the scheduled time 10.30 a.m. with 98 passengers on board its maiden flight to Mumbai. The flight will arrive in Mumbai at 12.10 a.m. Air India CEO K. Syam Sundar travelled in it.

The Mumbai-Vijayawada-Mumbai service of Air India Express will be available thrice a week on Tuesday, Friday and Sunday.

Mr. Raju said the runway expansion was likely to be completed by December and it would pave the way for flights to Singapore and Dubai.

He said the Ministry was in the process of framing regulations for operating sea-planes on Krishna river near Prakasam Barrage in Vijayawada.

Machilipatnam MP Konakalla Narayana, MLAs Gadde Rammohan Rao, Vallabhaneni Vamsi and Bode Prasad were present. A traditional water cannon salute was given to the Boeing 737 plane as it touched down on the runway.