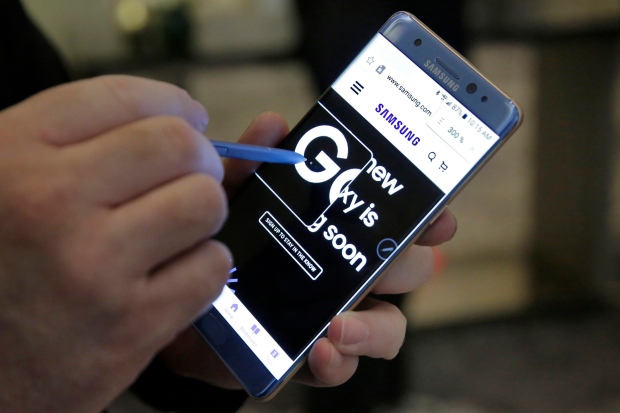 If you travel with a Samsung Note 7, you’re likely on the honour system when deciding whether to use or charge the device during a flight.

The Federal Aviation Administration says that because of concern about fires involving the new smartphone, it “strongly advises” airline passengers not to use or charge one or stow one in checked baggage.

It is very unusual for the FAA to warn passengers about a specific branded product.

And on Friday, the U.S Consumer Product Safety Commission urged owners of the phone to turn them off and leave them off. The agency said it was working with Samsung to launch an official recall as soon as possible. Samsung announced a voluntary recall of the device last week.

The three biggest U.S. airlines — American, Delta and United — said Friday that they were studying the FAA warning, but it was unclear how they would make sure that passengers keep the Samsung devices powered off.

A spokesman for the Transportation Security Administration declined to say whether screeners would look for the devices either in carry-on or checked bags.

“Unless it is a strictly prohibited item, there’s not much that the TSA can do,” said Todd Curtis, director of an air-safety foundation. He said the airlines could act on their own to bar the phones, as they did last year with hoverboards.

Singapore Airlines said that it prohibited the use or charging of the Galaxy device during flights.

Delta Air Lines and others posted links on their websites to the FAA warning. United, Alaska Airlines and others said that during pre-takeoff safety demonstrations, flight attendants would ask passengers not to use the Galaxy.

Spirit Airlines said it would send customers an email 12 hours before their flight to tell them about the FAA warning.

Virgin America, U.K.-based Virgin Atlantic and Australian carrier Qantas said they were telling passengers not to check the Galaxy phone and to leave it switched off during flights.

Safety experts have been concerned for several years about the fire risk when lithium-ion batteries are used or even carried on flights.

In February, a UN aviation panel recommended that nations adopt a temporary ban on cargo shipments of rechargeable lithium batteries on passenger airlines, although the policy wouldn’t apply to batteries inside devices like phones, laptops or tablets.

Shares of Samsung Electronics Co. tumbled 4 per cent Friday, the worst decline for the company’s stock since January.