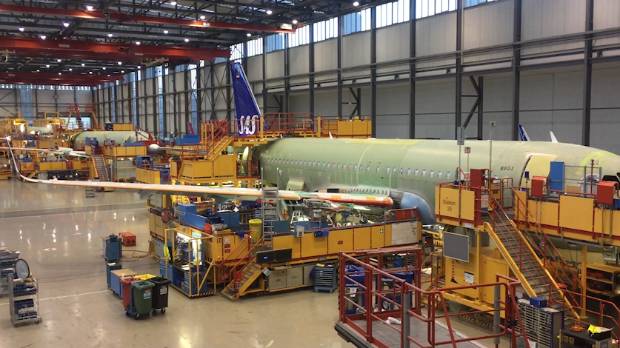 The Airbus factory in Hamburg

Airbus completed 2017 doing what it does best: selling its bread-and-butter narrow-body aircraft.

The European manufacturer late Thursday firmed up its biggest-ever order from Indigo Partners for 430 A320 aircraft –  a contract that was previously announced  –  while also unveiling a new deal for 50 re-engined versions of the same jet.

All told, the flurry of activity during the past two weeks has totalled 705 single-aisle plane orders with a sticker price of US$81.5 billion, pushing its full-year tally ahead of the figure at rival Boeing. The Airbus A350 is a direct competitor to the Boeing 787.

The orders for smaller jets also expose the flank that’s opened up at the other end of the manufacturer’s product line-up: wide-body and ultra large jumbos that are becoming increasingly hard to sell.

The final burst of deals pushed Airbus’s net new orders for the year to just beyond 1,000 planes, including 48 wide-bodies. The company was expecting the total to lag behind the 700 or so aircraft it planned to deliver in 2017.

At Boeing, net orders for single- and twin-aisle models amounted to 844 planes as of December 19, and the US company hasn’t announced any sales contracts since then.

As if to hammer home the weakness of wide-body demand, Airbus also confirmed late Thursday that an event scheduled for this week to mark the delivery to Qatar Airways. of its first A350-1000 twin-aisle plane will be delayed until early in the new year as the aircraft undergoes final preparations.

The move is the latest in a series of setbacks for the biggest A350 version after United Airlines and Cathay Pacific Airways. switched to the smaller -900 model, and adds a blemish to Airbus’s push to bring that jet to market.

The delay is also further evidence of Qatar Airway’s fickleness as a customer after past postponements and outright refusals by the airline to take deliveries of both narrow and wide-body jets, including a move earlier this year to scrap orders for four A350s.

The carrier’s order backlog has come into focus amid the Saudi Arabia-led isolation of its home country that has forced the airline to scrap and divert routes.

At the same time, a much-needed follow-on order for Airbus A380s from Emirates, the biggest customer for that aircraft, remains elusive, despite signals by the manufacturer just a few weeks ago that a deal could materialise before year-end.

Toulouse, France-based Airbus, which was widely expected to sign the A380 contract at the Dubai Air Show in November, needs the order to bulk up its backlog for the double-decker aircraft and keep the loss-making program alive.

Gaining clarity on the future of the A380 will be at the top of the to-do list for outgoing chief executive Officer Tom Enders, who revealed plans in December to step down in 2019, and his second in command Fabrice Bregier, who will be replaced in February by Guillaume Faury, CEO of the helicopters business.

Expressing disappointment that a deal with Emirates failed to materialise at the Dubai event, Bregier said in November he was confident Airbus could secure an order before the end of the year.

The executive has since said that should an order come, Airbus would be willing to commit to keeping the program going for another decade.

Emirates President Tim Clark has said talks derailed in part because of the airline’s concerns about the future of the model.

While Chicago-based Boeing has had similar difficulties winning orders for its biggest wide-body jets, it has managed to sell the smallest version, the 787, and has committed to accelerating production rates for the aircraft.

The lull in orders for twin-aisle planes could ease with the growth of long-haul, low-cost operators including Norwegian Air Shuttle and Singapore Airline’s Scoot unit, both of which are still in the first stages of expansion, Jefferies International analyst Sandy Morris said.

“You can be slightly curmudgeonly and say that the orders were almost all single aisle, but you have to believe that, if low-cost has the same effect on long-haul, the orders for wide-bodies could follow,” he said.