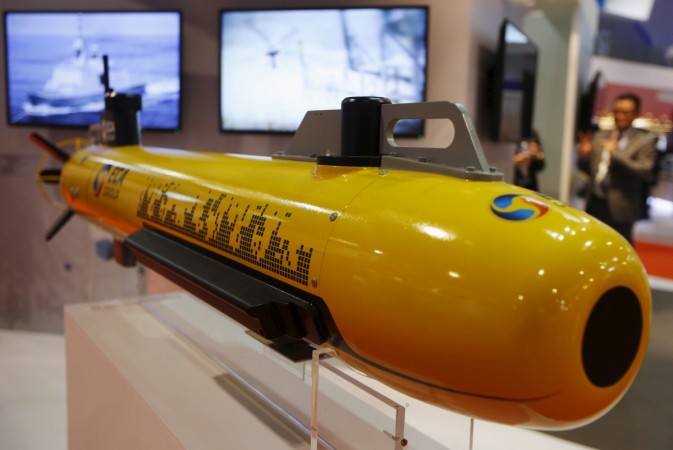 Underwater robots, overhead flights to study the physiography of Indian Monsoon. In Picture: An autonomous underwater vehicle used for surveying the sea floor is displayed at the ECA Robotics booth at the IMDEX Asia maritime defence exhibition in Singapore May 19, 2015.REUTERS

India and the UK have joined hands to study the ongoing Southwest monsoon using underwater robots and overhead aircraft in the Bay of Bengal region. The robots will be dropped off Indian ships to analyse oceanic conditions, while the aircraft will hover on top, measuring atmospheric circulations and synthesising data, reported AFP.

The combined effort is expected to help forecast the monsoonal onset in the country more accurately. This will also help understand how the south Asian monsoon affects the global climate, said Adrian Matthews from UK’s University of East Anglia (UEA).

Scientists from UEA’s School of Environmental Sciences and University of Reading will release the robots and fly the aircraft, respectively, for the joint observational exercise that will cost Rs. 76 crore and involve three projects.

The  (Bobble) project will determine, quantify and model ocean-atmosphere interactions that drive variability in the south Asian monsoon, reported the Mint. Alongside the two UK-based institutes, the National Oceanography Centre in Southampton and India’s four national institutes under the ministry will collaborate.

The robots under the Bobble project will measure ocean properties like sea salinity, temperature and current for a month’s time across the 400km stretch of the Bay, and relay daily data to the UK using mobile signals, according to a press release by the UEA cited by the business daily.

Two other projects include South West Asian Aerosol-Monsoon Interactions (SWAAMI) that intend to measure the presence of aerosols during pre-monsoons across northern India and the Bay of Bengal. The Interaction of Convective Organization and Monsoon Precipitation, Atmosphere, Surface and Sea (INCOMPASS) project will model out the cyclical surface-atmosphere feedback processes.

“The Indian monsoon is notoriously hard to predict. It is a very complicated weather system and the processes are not understood or recorded in science,” Mathew, the lead researcher, told AFP.

The data collated across projects will help understand the impact the smaller space and time scale have on predicting the large scale variability of the Indian monsoon, reported the Mint. It added that the project is jointly funded by India’s ministry of earth sciences, the UK Natural Environment Research Council, the UK’s Met Office and the Newton Fund.

Last week, India’s secretary to the ministry of earth sciences said that India would adopt a new dynamic model of monsoon forecast and invest in a supercomputer worth Rs. 400 crore for faster computing to generate 3-D models on developing monsoon patterns.

The June to September monsoonal showers provide 70 percent of rains for most regions in India, sustaining more than 600 million farm dependent lives in the country. Nearly 60 percent of India’s net sown area is rain-fed.