Although the FDA announced Wednesday that it would not recommend a third shot of the Pfizer-BioNTech COVID-19 vaccine for most Americans younger than 65, Mississippi resident Jen Buckley, 50, said she and her husband decided to get their booster doses anyway.

“We received our second shot almost eight months ago,” she said, explaining their reasoning for obtaining third shots, “and I’m worried the effects of the [two-dose] vaccine might be waning. We don’t want to leave ourselves vulnerable.”

In addition to senior citizens, the U.S. Food and Drug Administration authorized booster shots for individuals aged 18 to 64 who are at high risk of severe COVID-19 or who work in high-risk places. Buckley and her husband feared they don’t meet the criteria even though she takes medication that weakens her immune system and her husband suffers from hypertension and asthma.

Exacerbating Buckley’s concern is that she lives in Jackson County, Mississippi, where only 37% of the population is fully vaccinated. Given that reality, she sees limiting booster doses as a missed opportunity.

“If people refuse to take the vaccine, then we probably have extra doses that will expire, right? Why not let people who actually want a booster get one?” she asked.

Dr. Anthony Fauci, chief medical adviser to President Joe Biden, said he would support a third dose for all Americans if future data show it is effective. Sufficient data don’t yet exist in the United States, but research from Israel suggests that while the coronavirus vaccine’s effectiveness diminishes over time, a third shot of the Pfizer-BioNTech vaccine can restore protection from infection to 95%.

Buckley said she didn’t see the point in waiting while vaccine doses were available now.

“I have two grandchildren who can’t get vaccinated, one of whom is immunocompromised,” she said. “We have a duty to do whatever it takes to protect those children, and I think this can help.”

Kerry Compton is a pharmacist at Patio Drugs in Metairie, Louisiana, just outside New Orleans. He reported an uptick in individuals seeking booster shots last month after U.S. health officials announced those with compromised immune systems were eligible. His feeling, he said, is that most who reached out are the same proactive people who booked their vaccine appointments as soon as initial doses became available earlier in the year.

“I think some people are more concerned about the virus than others,” he said, “and I also think there’s some confusion about who’s eligible for a third dose and who isn’t.”

Compton blames the confusion on inconsistent messaging by U.S. officials. Before booster doses were approved for individuals with compromised immune systems, Biden said he expected booster shots would be available to the general public beginning September 20. The FDA’s recent announcement will make that impossible, at least for now.

“It’s a lot for the public to keep track of,” Compton said, “and — no judgment levied by me — but there might be some individuals who are getting their third dose even though they don’t qualify.”

Getting that booster, even among the ineligible, isn’t as hard as one might think. In Louisiana, for example, those receiving boosters must simply each complete an affidavit explaining why they are eligible. “But we weren’t instructed to verify that information, and we couldn’t even if we were,” Compton said. “We’re not the vaccine police. We simply follow the guidelines passed down to us.”

New Orleanian Lauren Castorena said that even though she doesn’t qualify for the booster, she planned on requesting one soon when she gets her flu shot. “And if I’m turned down,” she said, “I’ll talk to my doctor about giving me a note because of a recent surgery I had, or I’ll call local pharmacies to try to get a dose nearing its expiration date. Having a booster will help me feel more safe as I go about enjoying my life, so why not get one?”

To boost or not to boost

Kyle Carson has been watching closely as discussions about boosters have progressed. He’s happy the FDA has approved boosters for some portions of the population, but asked, “If it’s necessary for some groups to receive a booster, why wouldn’t it be advantageous for others as well?”

Before this week’s FDA announcement, Carson said he planned to seek out a third dose. Now, however, he said that despite his concern about the delta variant, he would wait for the FDA to authorize shots for the general public.

Rachel Sonn feels much the same. “I’m fairly confident in my own immune system and I’m fully vaccinated,” she said, “but if it takes too long for the FDA to approve a booster for the rest of us, I have no moral issue lying that I have an underlying condition or that I smoke or something.”

For some, the availability of boosters in the U.S. brings up a more global concern. Despite the fact that more than 3.2 billion COVID-19 vaccine doses had been administered around the world as of July 4, only 1% of individuals in low-income countries had received even a single dose, according to the website One World in Data. Experts have suggested, despite promises of more vaccine donations by richer nations like the United States, most residents of poorer countries will need to wait until 2023 to get vaccinated.

“I won’t get one until they’re allowed for me,” said Chance Simoncelli, a bartender in New Orleans. “Besides not wanting to be greedy, the more countries lacking vaccines, the more variants we’ll all have to deal with in the future.”

Others don’t see how delaying a booster shot would make a difference on a global scale.

“It makes me feel terrible because it is terrible,” Sonn said, “but me opting out of something that’s available as a citizen of the U.S. isn’t going to change that [global vaccine shortages].”

As younger Americans grapple with how to proceed, many who are 65 or older are relieved the FDA has approved a third dose for them.

“At my age, it’s frightening to become ill,” said Mary Chaput, 66. “The time I have left is shortening, frankly, and I feel robbed by those who aren’t vaccinated and are letting the virus mutate. Protection from this booster is the best way I have to reclaim a sense of normalcy.” 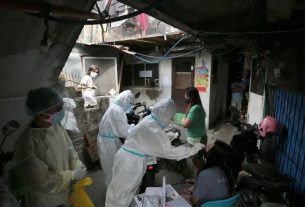 Why build a new station at Bukit Chagar instead of using existing JB Sentral? — Allen Chong