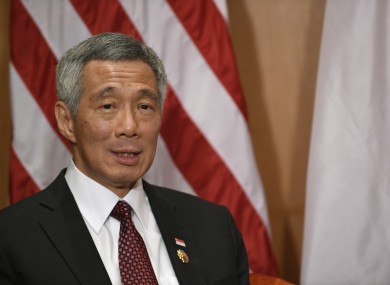 SINGAPORE PRIME MINISTER Lee Hsien Loong yesterday denied abusing his power and attempting to establish a dynasty as a family feud went public after the first anniversary of the death of his father Lee Kuan Yew.

Reacting to attacks from his younger sister Lee Wei Ling, the prime minister said in a Facebook post that he was “deeply saddened” by the claims and called them “completely untrue”.

Singapore on 23 March marked the first anniversary of the death of Lee Kuan Yew, the country’s authoritarian first prime minister who ruled from 1959 to 1990.

His death at age 91 sparked a massive outpouring of grief among Singaporeans, many of whom credit the family patriarch with turning Singapore from a poor former British colony into one of the world’s wealthiest and most stable societies.

Over 100 different activities were held to mark the first anniversary last month.

But the prime minister’s sister Lee Wei Ling, a physician who serves as senior adviser to the National Neuroscience Institute, went public on Facebook with her criticism of the commemorations – which she suggested may be part of dynasty-building – after a column she submitted to the country’s leading daily The Straits Times was rejected for publication. 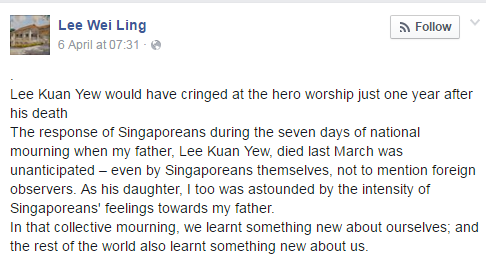 Yesterday she made public an email exchange with a Straits Times editor in which she accused her brother of having “no qualms abusing his power” in order to stage a commemoration just a year after their father’s death.

Lee Wei Ling said this was part of efforts by “the power that be” to “establish a dynasty” and vowed that she would not allow her father’s name to be “sullied”. In an earlier Facebook post she said that Lee Kuan Yew “would have cringed at the hero worship just one year after his death”.

The prime minister said the activities were mostly planned by citizens who wanted to show respect for the former leader.

A sample of the Prime Minister’s response to his sister Source: Facebook

“The idea that I should wish to establish a dynasty makes even less sense. Meritocracy is a fundamental value of our society, and neither I, the PAP (the ruling People’s Action Party), nor the Singapore public would tolerate any such attempt,” Lee wrote.

Despite his major achievements Lee Kuan Yew was criticised locally and abroad for restricting political freedom, including muzzling the press, jailing political opponents and suing critics for defamation.

Read: In modern Ireland, the pauper’s funeral is not a thing of the past