The US and Russia stood out from the preliminary data released by Korea Customs Service earlier this week, as South Korea imported significantly more cargoes from the two non-OPEC producers in 2017, while major Persian Gulf producers saw their market share fall. 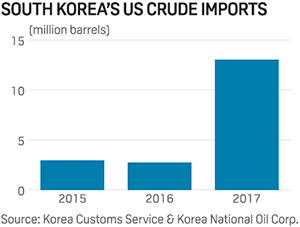 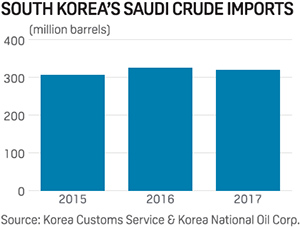 Asian crude traders were not too surprised by the latest statistics from Seoul as South Korean refiners had long been under pressure to diversify crude procurement sources amid strengthening Brent pricing complex and tightening Middle Eastern crude exports amid OPEC’s ongoing commitment to limit output.

“We all know South Korean refiners were one of the most active Asian buyers of North American crude oil last year … the customs data simply proved their arbitrage activities in 2017. It was in fact economical for all Asian refiners to buy cheaper WTI-linked grades last year,” said a sweet crude trader based in Singapore.

Asian refinery and trade sources pointed out that current market conditions would continue to favor South Korean, as well as other regional end-users, to continue shopping for some spot arbitrage cargoes in North America.

Several Northeast Asian sour crude traders said there is less incentive for regional end-users to pick up many light sweet crude cargoes from the European and West African markets as the Brent crude complex appears expensive.

The sustained strength in benchmark Brent prices following the shutdown of the North Sea Forties pipeline in the second half of December has pushed the Brent/Dubai Exchange of Futures for Swaps, as well as the Brent/NYMEX crude spread to multi-month highs.

The Brent/Dubai EFS — a key indicator of Brent’s premium to the Middle Eastern benchmark that often serves as a barometer of the strength in the European crude complex — averaged $3.40/b so far this month, the highest since June 2016 when it averaged $3.57/b.

A weaker WTI versus Brent and Dubai typically makes North and Central American crude grades priced against the US benchmark more competitive.

“Asian buyers often look for arbitrage barrels from the North Sea, Mediterranean and West Africa as well, but with such high Brent prices, they will focus more on North American supplies,” said a condensate trader at a South Korean refining and petrochemical company.

Earlier this month, Saudi Aramco raised the OSP differentials for its Arab Super Light and Arab Extra Light crude grades loading in February and destined for Asia by 20 cents/b and 10 cents/b respectively to $5.95/b and $3.15/b to the Oman and Dubai average.

Abu Dhabi National Oil Co. has set its retroactive December OSPs for Murban and Das Blend grades at $64.85/b and $64.50/b respectively, equivalent to premiums of $3.25/b and $2.90/b to Dubai or 42 cents/b higher compared to November.
Source: Platts