Armenia President: I am sure that EAEU has promising future 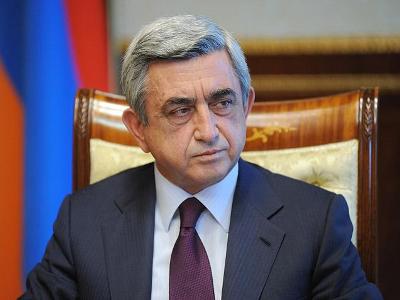 President of Armenia Serzh Sargsyan is sure that the Eurasian Economic Union has a promising future.

He said the aforementioned, making an address at the Supreme Eurasian Economic Council session held in Saint Petersburg.

“Our meeting today is a good opportunity to sum up the results of the two-year activity of the Eurasian Economic Union and identify our achievements, which, we think, are not few. I also think it is necessary to focus our attention on problematic issues hindering the full-scale functioning of our common economic space. Of course, it would be desirable that these pressing issues be discussed with the participation of our colleagues,” he said.

According to the President, the positive results of the Union’s functioning include decline in the rate of mutual trade reduction over the current year. Positive dynamics has also been observed in the agricultural production. Sarsgyan expressed hope that a number of decisions on the market of medicines and medical products, liberalization of the service sector by 2026 and conceptions on forming common markets of gas, oil and oil products will approve themselves in the near mid-term perspective.

Sargsyan also noted that thanks to the foundation laid by the Eurasian integration project, they have managed to significantly weaken the destructive consequences of the foreign economic shocks. Furthermore, he lauded the launch and functioning of the rotation mechanism for all the officials.

However, along with this, the potential of the Union is fulfilled insufficiently in terms of responding to the social and economic challenges, he noted.

In Sargsyan’s words, the Union must advance in two key directions. First, it should remove the remaining obstacles on the path to full liberalization of “four freedoms” and development of integration within the Union. Second, the national economies of member-states and the Union should be efficiently involved in the global trade system.

“In this context, the adoption of the Tax Code is a weighty step on the way to our further integration, since it outlines the shift to a common customs regulation in the entire territory of the economic union. It is important that the Code sets out leading approaches in line with the international standards. The application of the mentioned approaches will facilitate the procedure of taking goods across the EAEU border, making it transparent, including through the system of electronic declaration, which is our task,” Sargsyan stressed.

He noted that in this context, the Armenian side exerts consistent efforts toward applying the “single window” principle in the sphere of public services in order to liberalize the sector of trade of services.

“In our country, the sector of informational technologies is among the leading ones: significant experience has been accumulated, which it is important to use in the digital transformation of economic sectors during the formation of the Union’s digital market. To participate in the modern world labor division and receive results in the sphere of digital economy, it is necessary to have a significant voice. Thus, we are interested in agreed efforts and implementation of joint projects, as well as development and implementation of strategic directions of the development of the EAEU digital economy in 2017. In our opinion, the implementation of initiatives in the transportation and logistics system, energy, agriculture and microelectronics can become especially important. Armenia is ready to take an active part in their implementation,” the Armenian President noted.

He also attached importance to conducting a coordinated transportation policy. “Armenia seriously faces the issue of ensuring continuous communication with the EAEU member-states. In the absence of a common border with the EAEU states, our trade and economic communication is carried out via the territory of Georgia, through the Upper Lars checkpoint. But, unfortunately, due to a number of circumstances—weather conditions and bureaucratic procedures—the work of this checkpoint is periodically interrupted, inflicting serious losses on our economic operators. In this context, we attach great importance to the creation of a separate passage for transportation means belonging to the EAEU member-states, which will significantly facilitate cargo transportations. This will give the business representatives of our countries a real feeling of the usefulness of our Union’s functioning,” he added.

“During the recent visit of the Iranian President Hassan Rouhani to Armenia, we discussed in detail the prospects for deepening the trade and economic ties between the EAEU and Iran, including the issue of creating a free trade zone. In particular, the wide opportunities of mutually beneficial cooperation, which will open for the economic operators of our country and Iran, were presented. The President of Iran expressed interest in signing a temporary agreement with the EAEU, leading to the formation of a free trade zone,” he noted.

Sarsgyan also added that Armenia is actively contributing to the negotiation process between the Eurasian Economic Commission and Iran, aiming to reach the signing of the aforementioned agreement as soon as possible.