With New Year’s Eve celebrations approaching, this is the busiest time of the year for the export of lobsters from Nova Scotia.

“Both of those markets have preference for premium quality so we target clients who want the best of Canadian hard-shell lobster,” said Lamont.

The lobster industry has shown continued growth in Nova Scotia this decade, but this season has been a tough one for lobster fishermen.

Harsh weather and low catches made for low prices around $5 a pound when the season opened a month ago.

Prices at the wharf have since jumped to $8 a pound.

“It’s a very changing environment on a week-to-week basis based on international demand, the level of the catch and weather in particular,” said Lamont.

“It’s been the most challenging December period anybody can remember in 50 years.”

China has become a player in the lobster industry in Nova Scotia and the lobster market has exploded in the Pacific Rim. In China, Nova Scotia lobster is sometimes known as “Boston lobster.”

Lamont said his company sells lobsters to Vietnam, Malaysia, Hong Kong and Singapore. There are also buyers in northern Europe and throughout the U.S.

The lobster export industry in Nova Scotia is benefiting from a new addition to the Halifax Stanfield International Airport. 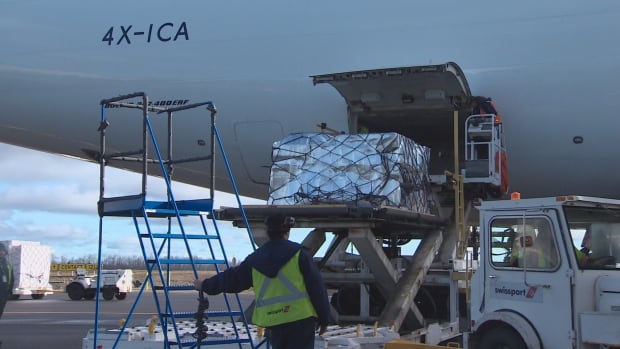 An aircraft loaded with 70,000 pounds of lobster left Halifax on Thursday morning to be unloaded in Liege, Belgium and Incheon, South Korea.

The cargo pad has been used for seven flights of lobster headed to those markets over the holidays.

“It allows the cargo carriers to come in and do a much quicker turnaround,” said Peter Spurway, the airport’s vice-president of corporate communications.

“The faster the product can be taken out of the ocean, trucked over here and taken to a market in Europe or Asia, the fresher it is then obviously the higher value it is.”