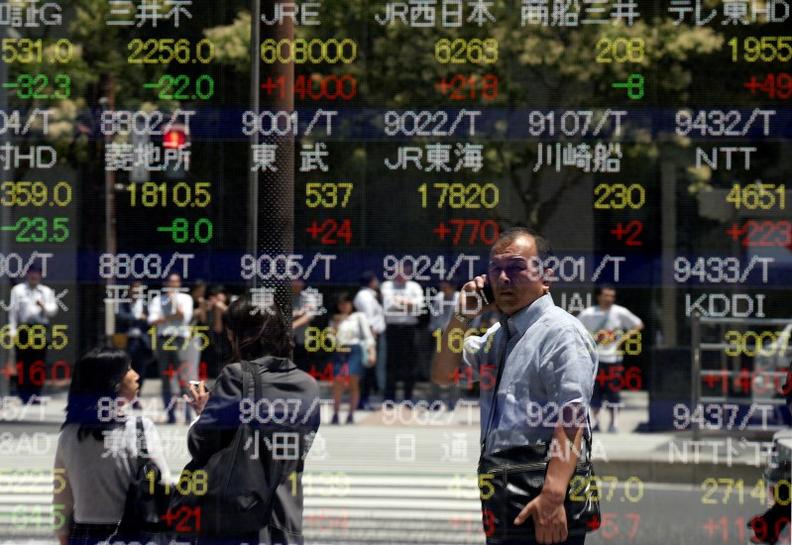 MSCI’s broadest index of Asia-Pacific shares outside Japan .MIAPJ0000PUS nudged up 0.1 percent. It was headed to gain 1.9 percent on the week, having brushed a 1-year high on Wednesday.

The S&P 500 .SPX, the Dow .DJI and Nasdaq .IXIC all closed at historic highs on Thursday for the first time since 1999 on higher crude oil and upbeat corporate results.

Supporting investor appetite for risk, oil prices climbed more than 4 percent overnight after a Saudi oil minister hinted toward possible action to stabilize prices and triggered a round of buying.

“Industrial commodities rose, led by oil, and overnight trading displayed ‘risk on’ characteristics despite the lack of an obvious trigger. Important data from China may change the course of the trading day.”

Chinese indicators to be released on Friday include industrial output and retail sales.

The global markets will also sift through the string of U.S. data, notably retail sales, due later in the session for latest cues about the world’s largest economy and whether it is robust enough to withstand further monetary tightening.

U.S. retail sales are expected to show a 0.4 percent monthly increase in July, according to the median estimate of 64 economists polled by Reuters.

The greenback rose after San Francisco Fed President John Williams told the Washington Post that the U.S. central bank should raise rates this year because of improving labor market conditions and the likelihood that inflation is heading higher.

The New Zealand dollar was firm at $0.7210 NZD=D4 after surging on Thursday to $0.7351, its highest in more than a year on, after the Reserve Bank of New Zealand cut rates by 25 basis points to 2.0 percent, a smaller cut than some investors had expected.

Oil prices rode the momentum from their overnight rally and extended gains. U.S. crude was up 0.5 percent at $43.73 a barrel CLc1, on track to gain nearly 5 percent on the week.