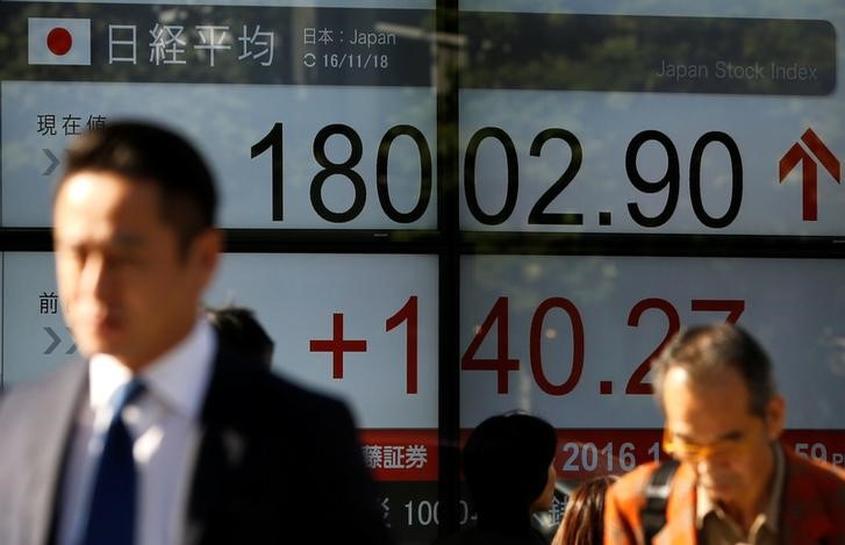 SINGAPORE Asian equities advanced on Tuesday as the return of risk appetite following a centrist victory in the first round of the French presidential election lifted several regional markets to multi-year highs, while the euro retained most of its overnight gains.

Safe-haven assets, including the yen and gold remained under pressure, while the Canadian dollar fell after the U.S. announced new duties averaging 20 percent on Canadian softwood lumber imports. The Canadian currency CAD= tumbled to a four-month low as the U.S. dollar strengthened 0.4 percent to C$1.3554.

“Asian markets appear to be still lingering in the glow of relief after the French election,” said Jingyi Pan, market strategist at IG in Singapore. “The jubilance in markets overnight has also added to the optimism.”

U.S. President Donald Trump’s promise of an announcement on a tax reform plan on Wednesday would offer further impetus to markets, she added.

Indonesian stocks .JKSE opened at an all-time high, and Malaysian stocks .KLSE hit their highest level since May 2015.

Australia and New Zealand are closed for the Anzac Day holiday.

Polls show Emmanuel Macron defeating anti-euro nationalist Marine Le Pen by as much as 30 percentage points in the second round of the French presidential election in two weeks.

On Wall Street, the Nasdaq .IXIC climbed 1.2 percent to a record high, while the Dow .DJI and the S&P .SPX both gained 1.1 percent.

The euro EUR=EBS was at $1.08585 on Tuesday, slightly lower than Monday’s close. It retained most of Monday’s 1.3 percent gain, which was its strongest one-day performance in 10-1/2 months, and lifted the common currency to a 5 1/2-month high.

The euro’s earlier gains had weighed on the dollar index, which touched a four-week low overnight. The index, which tracks the greenback against a basket of trade-weighted peers, was marginally higher at 99.18, failing to make up most of Monday’s 0.9 percent loss.

The dollar advanced 0.4 percent to 110.085 yen JPY= on Tuesday, extending Monday’s 0.6 percent jump as investors sold off the safe-haven yen.

A strong earnings season in the U.S. has also lifted investors’ spirits, with 77 percent of the 100 companies that have reported first-quarter results so far beating profit expectations.

This week is set to be the busiest in at least a decade, with over 190 S&P 500 companies reporting first-quarter results, including heavy weights Alphabet (GOOG.O) and Microsoft .MSFT.O.

This week in Asia, investors await a raft of economic indicators, including first-quarter inflation data for Australia and Japan, the Bank of Japan’s interest rate decision, Japan’s March unemployment rate and first-quarter gross domestic product for Taiwan and South Korea.

In commodities markets, oil prices crept higher after six straight sessions of losses, although gains were capped by fears that the Organization of Petroleum Exporting Countries may not extend output cuts beyond June 30, and as Russia indicated it can lift output if the deal on curbs lapses.

U.S. crude CLc1 added 0.5 percent to $49.49 a barrel, but hovered close to the lowest level in almost four weeks hit on Monday.

Gold XAU= inched lower, remaining near a two-week low touched overnight. It was trading 0.1 percent lower at $1,273.91 an ounce.