Asian US dollar-denominated bond issuance has hit a record this year, driven by greater liquidity and demand from investors in the region, as subscriptions shifted away from the traditional American market.

Even as local Asian governments from China to India push for the development of their own debt markets, the expanding pool of investors want more exposure to the US dollar as they search for diversification, higher returns and lower risks amid fundamental improvement in the region, analysts said.

Total new issuance of dollar bonds by Asia-Pacific companies excluding those in Japan climbed to a record high of US$377 billion this year, up 40 per cent from 2016 and four-and-a-half times in the past decade, according to Thomson Reuters data.

The rise comes on the back of a low interest rate environment and a weak US dollar resulting in narrower credit spreads – conditions favourable to issuers to sell debt.

Even with expectations of the US Federal Reserve raising interest rates by two or three times next year, levels would stay considerably below historical averages, encouraging healthy bond activity, analysts said.

ANZ Bank predicts the size of the dollar debt market for Asia excluding Japan to reach a total value of US$1 trillion by 2020.

With this market continuing to play a major role in the region’s transformation going forward, its ample liquidity may provide alternative funding to new corporate issuers from markets of China’s Belt and Road Initiative, and even from developed countries.

“The Asian market has matured to a certain critical mass,” said Jimmy Choi, co-head of capital markets at ANZ Bank. “We think the next theme is whether emerging markets or Asia can now support the developed markets.” 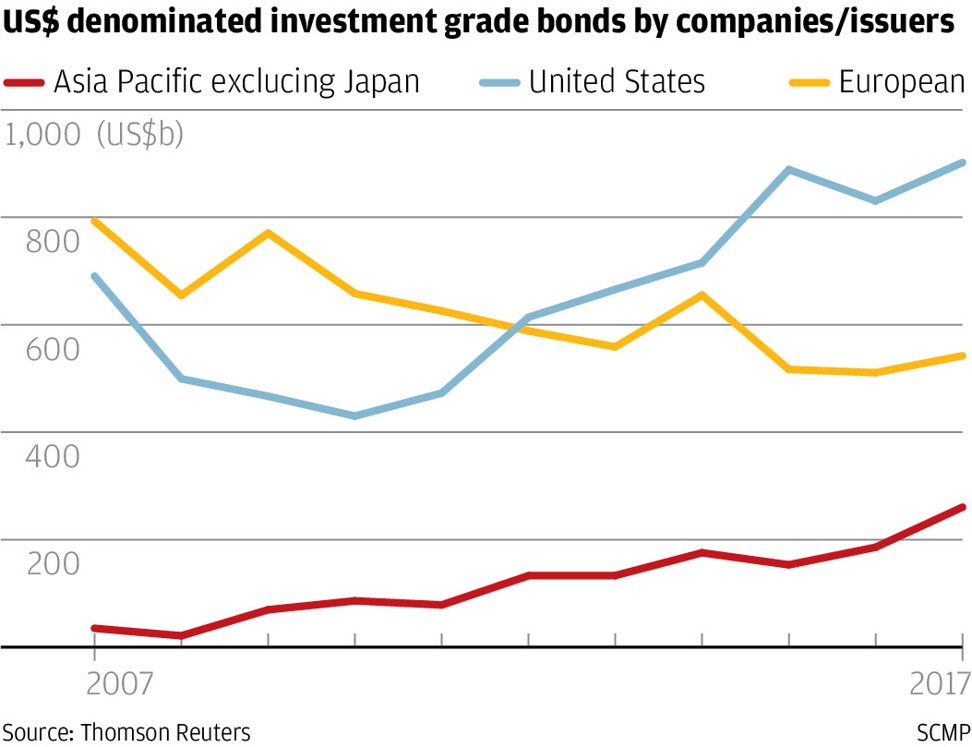 In the past, Asian issuers that wanted US dollar funding would depend on the so-called 144A market, which refers to private placements for US-based investors. But about 80 per cent of Asian credit was now being bought by Asian investors, ANZ’s Choi added.

“Decisions about Asian credits are increasingly made in Asia by investors based here in the region,” Armstrong said.

Several massive deals this year had not required or involved the US; they were sold through the Regulation S market in Asia or Europe that exempts security offerings with minimal disclosure requirements.

Deal volume in the Reg S market in Asia broke records in 2017, increasing by 55 per cent from the previous year to reach US$236.95 billion, according to Thomson Reuters data. Asian debt that only used the Reg S market this year included jumbo deals – Chinese property developer Evergrande’s US$6.6 billion bond sale completed in June, the subsidiary of Chinese distressed debt manager Huarong Asset Management’s US$3.39 billion issue in October and China Cinda Asset Management’s US$2.99 billion note in March.

The year’s increased volume was, in large part, bolstered by mainland Chinese issuers who had been shut out from the onshore bond market at home because of government measures to cut risky lending behaviour, according to analysts.

“China will fight the critical battle of addressing major risks, with the priority on managing and preventing financial risk over the next three years,” reported state-owned Xinhua, citing a statement at the conclusion of the China’s Central Economic Work Conference this month. 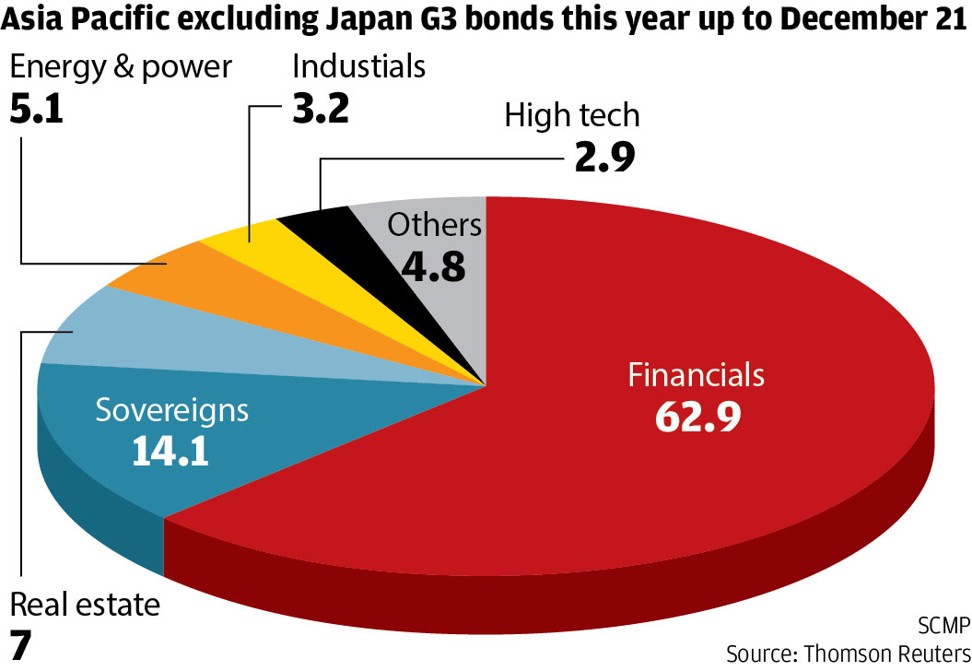 Chinese issuers accounted for over two-thirds of bond issuance this year in Asia-Pacific excluding Japan, with the financial sector, especially banks, dominating the sales.

Armstrong said there was a particularly significant increase in high yield bond transactions, given the robust level of activity in the real estate sector in China.

With volume, Asia’s bond market has also strengthened by depth and liquidity in the past two years, from a high-quality and long-term institutional mix of insurance companies and pension funds to treasuries of banks, according to Owen Gallimore, head of credit strategy at ANZ Bank. Global fund managers such as Fidelity, BlackRock, Aberdeen and Pimco have also been rotating into Asian bonds.

The investor base was also diversified geographically across China, Hong Kong and Singapore, Gallimore added.

Dedicated emerging market funds had added significant liquidity money into Asian debt this year, which saw around US$67.4 billion of net inflows in 2017 so far, compared to just US$23.1 billion in 2016, Credit Suisse’s Armstrong said.

Chinese investors had also been active, accounting for at least 35 per cent of the subscriptions on the average of transactions by Chinese issuers, he added.

Previous Pioneer architect John Portman dead at 93
Next Hasmukh Adhia: The man who changed the way we do business