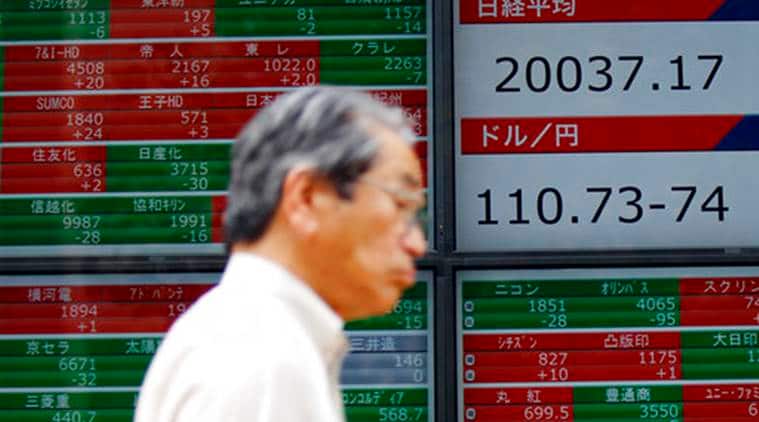 A man passes an electronic stock board outside a securities firm in Tokyo Tuesday, Aug. 8, 2017. (AP Photo/Sherry Zheng/Files)

Asian stock markets rose Monday as investors looked ahead to a US Federal Reserve policy meeting and President Donald Trump’s speech at the United Nations.

Fed watch: Investors looked ahead to this week’s Fed policy meeting for indications on the timing of the next rate hike and when the Fed might start shrinking its multitrillion-dollar stockpile of bonds. Forecasters expect the Fed to leave rates unchanged and stick to plans to raise rates in December. Investors also are looking for indications of when and how central bankers will start selling off bonds bought to shore up economic growth after the 2008 crisis.

North Korea: Markets are watching Trump’s UN speech Tuesday for any mention of military options on North Korea following its latest missile launch. The Security Council criticized the “highly provocative” launch over Japan on Friday. The American ambassador to the United Nations, Nikki Haley, said Sunday that North Korea will be destroyed if it continues with reckless behavior.

Analyst’s take: “On the political front, no prizes for guessing that North Korea will top the agenda of President Trump’s address to the gathering of world leaders at the UN,” said Rob Carnell of ING in a report. “The political heat will also rise in Germany and New Zealand ahead of weekend elections. There could also be some more political action in Japan before long, as the media is suggesting that (Prime Minister Shinzo) Abe may call a snap election next month amid his rising approval rating and fragile opposition.”

Central Bank watch: Central banks are due to hold policy meetings in Japan, Taiwan, Philippines and Indonesia. The Reserve Bank of Australia is due to release minutes of its meeting earlier this month. All are expected to leave policy unchanged but forecasters expect Australian policymakers to strike a more hawkish tone following stronger recent economic activity.

Energy: Benchmark US crude added 2 cents to $49.91 per barrel in electronic trading on the New York Mercantile Exchange. It closed Friday unchanged at $49.89. Brent crude, used to price international oils, rose 11 cents to $55.73 in London. It added 15 cents on Friday to $55.62.