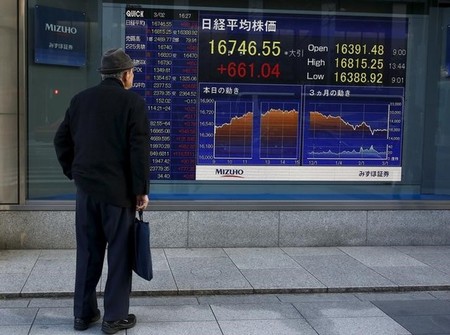 Asian stocks rose to their highest levels in more than four months on Thursday and regional currencies weakened led by the Singapore dollar as hopes grew that more central banks will join the city state in easing monetary policy in the comiing months.MSCI’s broadest index of Asia-Pacific shares outside Japan rose 0.3 percent, reaching its highest level since Dec. 2. The index has risen 4.7 percent since Friday, breaking above several resistance levels to signal further gains.Singapore’s central bank on Thursday surprised markets by setting the rate of appreciation of the Singapore dollar policy band at zero percent after data previously showed economic growth stalled in the first quarter.“The MAS is delivering a strong message by returning policy to post-GFC settings,” Westpac strategists wrote in a note, referring to the Global Financial Crisis.“As one of the world’s most trade-sensitive economies, Singapore’s concern over a “less favourable external environment” should be noted by the likes of the RBA and RBNZ,” they said referring to the central banks of Australia and New Zealand.Notwithstanding the optimistic trade data out of China on Wednesday, Singapore’s policy decision is yet another reminder of the headwinds facing the global economy.Earlier this week, the IMF cut its global growth forecast for the fourth time in the past year, citing a bunch of factors including chronic weakness in advanced economies.Stock markets across the region were a sea of green led by Japan and Hong Kong as investors interpreted this as sign of more policy easing by the trade-dependent economies of South East Asia and a shallower trajectory of interest rate increases by the U.S. Federal Reserve in the coming months.Overnight, U.S. S&P 500 Index <.SPX> gained 1 percent to a four-month high after JPMorgan Chase’s (>> JPMorgan Chase & Co.) first quarter earnings fell less than expected, helping to lift the S&P 500 financial sector <.SPSY> 2.2 percent.