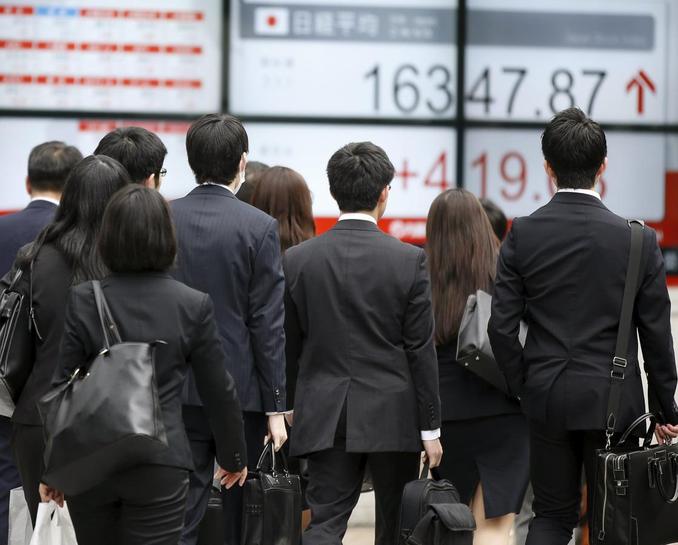 People walk in front of an electronic board showing Japan’s Nikkei average outside a brokerage in Tokyo, Japan, April 13, 2016.

HONG KONG Asian stocks rose to their highest levels in more than four months on Thursday and regional currencies weakened led by the Singapore dollar as hopes grew that more central banks will join the city state in easing monetary policy in the coming months.

European shares were seen opening flat on Thursday, with bullish sentiment expected to keep European equities near their highest level in a month.

Singapore’s central bank on Thursday surprised markets by setting the rate of appreciation of the Singapore dollar policy band at zero percent after data previously showed economic growth stalled in the first quarter.

“It’s very interesting, and eye-catching, that the MAS has gone back to post-global financial crisis settings, and sends a strong message about the weak external environment,” said Sean Callow, senior currency strategist at Westpac in Sydney.

“As one of the world’s most trade-sensitive economies, Singapore’s concern over a ‘less favourable external environment’ should be noted by the likes” of South Korea, Australia and New Zealand, Callow said.

Notwithstanding the optimistic trade data out of China on Wednesday, Singapore’s policy decision is yet another reminder of the headwinds facing the global economy.

Earlier this week, the IMF cut its global growth forecast for the fourth time in the past year, citing a bunch of factors including chronic weakness in advanced economies.

Stock markets across the region were a sea of green led by Japan and Hong Kong as investors interpreted this as sign of more policy easing by the trade-dependent economies of South East Asia and a shallower trajectory of interest rate increases by the U.S. Federal Reserve in the coming months.

Risk appetite remained robust with an index of high yield debt settling at its highest levels since early December.

In the government bond markets, yields swung lower with the yield on the 30-year Japanese government bond briefly falling a record low of 0.385 percent. U.S. debt followed with yields on ten-year notes slipping to 1.75 percent.

The yield curve, measuring the gap between the ten-year notes and the two-year bills and an indicator of interest rate expectations, flattened to 100 basis points, signalling a benign rate view.

In the currency markets, rising risk appetite and the hunger for yield spurred the dollar to turn the tables on the lower-yielding euro and yen.

The euro extended its weakness in Asian hours after falling 1 percent on Wednesday, its biggest fall in 5 months. In afternoon trades, it was changing hands at $1.12550, 0.1 percent weaker than Wednesday and off Tuesday’s six-month high of $1.1465.

The dollar bounced back against the yen to 109.37, extending the recovery from its 17-month low of 107.63 touched on Monday despite softer-than-expected U.S. producer prices and retail sales numbers last month.

In Asia, the Singapore dollar weakened 1 percent after the city state’s central bank eased its policy, triggering a downdraft in other Asian currencies. The Korean won fell more than one percent against the greenback in early deals.

Prices fell after Reuters reported that Russian oil minister Alexander Novak told a closed-door briefing that a deal on an oil output freeze scheduled to be signed this month in Doha will be loosely framed with few detailed commitments.

Brent crude futures fell 1.5 percent in Asian trade on Thursday to $43.53 per barrel after having scaled a high of $44.94 on Wednesday.