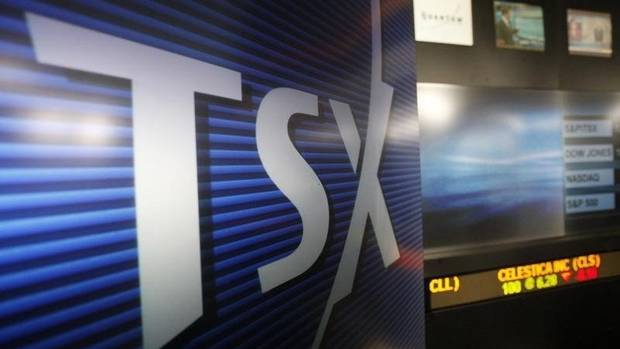 Canada’s main stock index rose to a two-month high, led by gains for the financial and energy groups, while some lumber stocks rallied after the U.S. set duties on the product that were lower than some market participants had expected.

The Canadian dollar slumped to a 14-month low against its U.S. counterpart on Tuesday after the United States said it would impose preliminary anti-subsidy duties averaging 20 per cent on imports of Canadian softwood lumber.

The move sets a tense tone as the two countries and Mexico prepare to renegotiate the 23-year-old North American Free Trade Agreement.

Recent weakening in the price of oil, one of Canada’s major exports, has added to pressure on the nation’s currency amid doubts about the Organization of the Petroleum Exporting Countries’ ability to reduce global crude inventories.

Canadian government bond prices were lower across the yield curve in sympathy with U.S. Treasuries.

The Nasdaq breached the 6,000 mark for the first time ever on Tuesday, spurred by a raft of strong corporate earnings and President Donald Trump’s promise of a major tax reform plan.

The tech-heavy Nasdaq rose as much as 0.4 per cent to hit a record level of 6,007.72 helped by gains in Biogen and Apple.

The index first breached the 5,000 mark on March 7, 2000 and closed above that level two days later during the height of the tech boom.

Trump promised last week to make “a big tax reform and tax reduction” announcement on Wednesday. The president has directed his aides to move quickly on a plan to cut the corporate income tax rate to 15 per cent from 35 per cent, a Trump administration official said on Monday.

Nine of the 11 major S&P 500 sectors were higher, with materials and financials in the lead.

Tuesday’s gains build on a day-earlier rally, which was driven by the victory of centrist candidate Emmanuel Macron in the first round of the French presidential election. Polls show Macron is likely to beat his far-right rival Marine Le Pen in a deciding vote on May 7.

“The French vote and Trump’s plan to slash corporate taxes to 15 per cent are two powerful forces that will still likely contribute to a positive trend as earnings prove to be better than expected,” Peter Cardillo, chief market economist at First Standard Financial wrote in a note.

Of the 100 S&P 500 companies that have reported results so far, 77 per cent have beaten profit expectations, according to Thomson Reuters I/B/E/S. Over the past four quarters, 71 per cent of the companies had beaten estimates.

Straight Path rose 6.3 per cent after the company said a “multi-national telecommunications company” had offered $104.64 per-share, topping AT&T’s bid of $95.63 per share.

Sandwich supplier AdvancePierre Foods jumped 9.2 per cent after Tyson Foods said it would buy the company for about $3.2 billion in cash.

Brent is down 10 per cent since late 2016, despite efforts led by the Organization of the Petroleum Exporting Countries and Russia to cut output by 1.8 million barrels per day (bpd) in the first half of 2017.

With oil supplies still around record highs, Stephen Schork of the Schork report said on Tuesday that “OPEC has failed miserably in its endeavor to balance the oil market.”

JPMorgan said in a market note “it is evident that … crude markets are still struggling to clear (oversupply).” The bank said it was closing its “August Brent long position at a loss.”

To reduce the supply overhang, JPMorgan said OPEC “will be forced to renew, and possibly deepen the agreement if they wish to keep prices much above $50 per barrel.”

Russia said at the weekend its oil output could climb to the highest rate in 30 years if OPEC and non-OPEC producers do not extend their supply reduction deal beyond June 30.

Extreme weakness in physical crude, where prices in the North Sea market have fallen to their lowest this year, is also acting as a drag on futures.

But one analyst said crude demand could pick up and the long-awaited draw in global inventories could start to show with refinery maintenance around Europe and Russia set to peak in May at an estimated 1.5 million bpd.

“If you look at the last six weeks, when you include the U.S., Europe, Singapore and floating storage, (inventories) have been going down on average by 8 million barrels a week,” SEB commodities strategist Bjarne Schieldrop said.

If that pace continued, he said it would equate to a draw down of 250 million to 300 million barrels by the end of 2017.

“With refineries out, you have a lot of crude oil sloshing around, creating weakness in the spot price,” he said. “We still have the OPEC meeting ahead of us on May 25 and it’s always uncertain. But it doesn’t make sense to sell down to $45 ahead of that.”