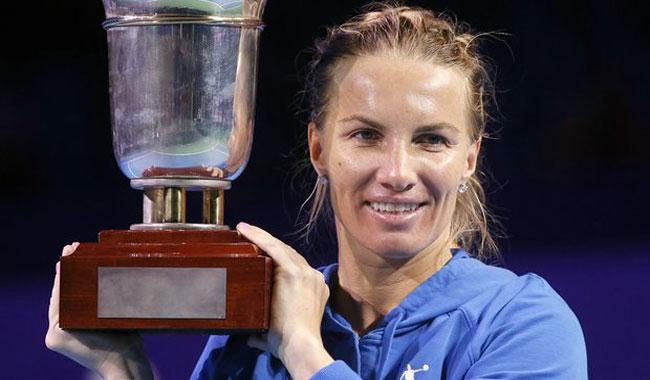 MOSCOW: Svetlana Kuznetsova beat fatigue to retain her Kremlin Cup title on Saturday with a straight-sets win over Daria Gavrilova and claim the last spot in the season-ending WTA Finals in Singapore.

Russia´s two-time Grand Slam title winner, ranked ninth in the world but the top seed in Moscow, won 6-2, 6-1 in one hour, 11 minutes to record her third victory over the 22-year-old Australian in as many meetings.

“I felt worn out ahead of the start and had no idea of how I would play today,” Kuznetsova, 31, said.

“Luckily, my desire to play prevailed and I managed to overcome the tiredness. I really wanted to show my best tennis here and I´m happy that everything worked well.”

With her Kremlin Cup win Kuznetsova leap-frogged Johanna Konta of Britain to take the last spot in next week´s WTA Finals.

Moscow-born Gavrilova, who was playing in her first WTA tour final, started in lively fashion, breaking early for a 2-0 lead, but Kuznetsova broke back on three occasions to take the opening set in 43 minutes.

In the second Kuznetsova underlined her supremacy on the hard court of Moscow´s Olympic indoor stadium, claiming the set and the match after three more breaks of serve.

“I played twice a day since Tuesday and was almost exhausted by today,” said Gavrilova, who became an Australian only citizen last year.

“I have always loved playing here. It´s been a very special tournament for me since my childhood, when I came here to watch the matches after tennis practice. And I´m really happy that I played my first career final in Moscow.”

The Italian will on Sunday face the sixth-seeded Spaniard Pablo Carreno Busta, who saw off the French 36-year-old veteran Stephane Robert 6-3, 7-6 (7/2).