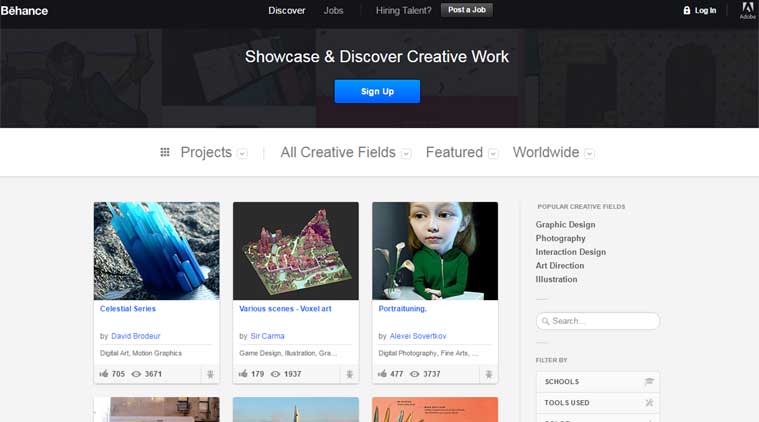 Adobe is seeing an explosion in experience design out of India, particularly Bangalore. Mala Sharma, Adobe’s vice-president and general manager for creative cloud product, marketing and community, told IndianExpress.com that India, Australia and Singapore where the top 3 locations in APAC for experience design on the Behance network and Bangalore was the leading city.

Experience design, or XD, is the practice of designing products, processes and services with a focus on user experience that is culturally relevant. “In Behance, we have this notion of creative fields, and Experience Design is one of them. When we look at projects submitted, APAC is a significant contributor with Bangalore as a city being biggest contributor. We think this is because of the increasing consumption on mobile and the large number of startups that are trying to bring down another company based on its mobile designs,” Sharma said during a telephonic interaction. Behance is a social network for creative professionals offered as part of Creative Cloud.

As part of its Creative Cloud suite, Adobe has just launched a prototyping and user experience app called Adobe XD for Mac OS users. Sharma said it was the only end-to-end solution that allows customers to prototype and share. She said Adobe was getting active feedback from early adopters. She said experience design was the single biggest opportunity for Adobe at the moment.

She said in 2016 Creative Cloud will focus on bringing together desktop and mobile. “The experience has to be consistent wherever the consumer is consuming, it also has to be relevant,” she said, adding that Adobe will offer whatever engagement they need to move to the next step.

She said the attempt has been to make mobile and desktop workflows completely interchangeable and cited the example of Lightroom which offers a very consistent experience as the mobile app is not a companion app, but a core app.

Sharma said Adobe was trying to tap into the next generation of creators, by offering apps that appeal to the social savvy youth. She said the company will have a mobile only offering for this broader audience by the end of this year.

“Our users should be able to consume and create wherever they are, and asset workflow lets them do that. This is why asset workflow has to be in the centre and be the central nervous system of the Creative Cloud,” she said.

Sharma, who has led Creative Cloud since its inception transforming it from a boxed software to a perpetual license, says Adobe was the only company that allowed customers to design and deliver content as well as measure engagement. She said the company was looking at whether there are packages that can be more relevant for customers. “We could offer different ways of paying based on customer budget. Some customers want to pay month to month, for instance.”