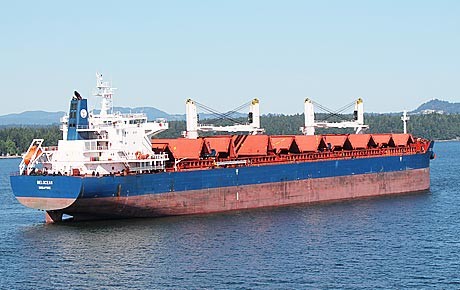 M/S Belstar, M/S Belnor and M/S Belisland have continued the long-term contracts to Canpotex of Canada. Canpotex is one of the world’s largest exporters of potash, a fertilizer product imported in large volumes by countries such as China, India and Brazil. M/S Belocean and M/S Belforest are both on time charter to Cargill. M/S Belocean is open in May 2017, whereas M/S Belforest will be open in September 2017. All ships have sailed without significant off-hire. Technical management is handled by Belships Management (Singapore), with a total fleet of 12 ships under technical management.

Hedging the Group’s interest exposure on bank loan is considered on an ongoing basis. The hedging level of interest rate exposure is currently around 80% (leases not included).

At the end of the 1st quarter of 2017, the book value per share amounted to NOK 3.83 (USD 0.45), while the equity ratio was 20.0%. Added value related to the long-term charter party for M/S Belisland is not reflected in the balance sheet.

The Capesize-index ended the first quarter at USD 18,864 per day, whereas the Panamax-index ended at USD 11,025 per day. The Supramax-index ended the quarter at USD 9,760 per day. As per today the Cape index stands at USD 15,524 per day, Panamax-index at USD 12,916 per day and Supramax-index at USD 10,088 per day. Following the Chinese New Year celebration in February, the spot market rates as well as ship values have increased. Baltic S&P Assessment’s valuation of a 5-year old Supramax is now USD 16.7 million, up from USD 13.6 million at the beginning of the year.

China GDP-growth has picked up for the second-straight quarter to 6.9% annualized, on the back of increased activity in real estate, infrastructure projects and export. The year-on-year growth in total power production is 6.7%, with thermal coal being the dominant energy source. The imported volume of high grade coal from Australia and Indonesia has increased substantially, giving vital support to the dry bulk market.

Belships concentrates on the dry bulk market, with 5 x modern Supramax/Ultramax in service. In addition, a 63,000 dwt Ultramax is scheduled for delivery from Imabari Shipbuilding in January 2018 for long-term timecharter incl. purchase option.

Iron ore import to China in 2017 is expected to grow only moderately from current level of about 1 bn tons, but the imported volumes of coal may surprise on the upside. Import of grain products to China is also expected to grow. The prognosis for the aggregate dry bulk market in 2017 is a growth in seaborne trade in the region of 2.0-2.5%.

Ordering of new ships is still very limited, but the scrapping activity has also slowed on the back of the improved market rates. Fearnresearch believes that the net growth in tonnage supply during 2017-2020 will be very limited following IMO’s new regulations for ballast water treatment systems and scrubbers gradually to be installed on all vessels.

Belships’ ships are chartered out on fixed rates to reputable counterparts, representing a future nominal gross hire of around USD 58 million.

Focus will be to further develop Belships as an owner and operator of modern bulk carriers to reputable counterparts. Our ambition is to build a portfolio of quality ships and robust charter parties that will generate distributable cash flows.