Beyond the scientific-medical realm 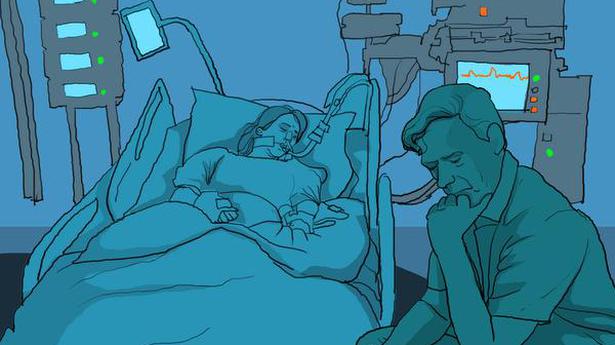 As a cardiologist for over three decades, I have lived with patients for a significant part of my life. Sometimes you see patients recover miraculously, beyond our scientific knowledge. One such case began in December 2014.

That evening I spent some time with my wife and daughter, who was at home after delivering twins. We went to bed around 11. Around 3 a.m. my daughter called me to say my wife had a severe headache. I rushed to her. She suddenly become unconscious, went into deep coma and was unresponsive, rolling her hands outwards. It was what we call a deceleration sign. I thought she was bleeding into the brain.

I was in a fairly senior position in a multispecialty hospital and had more than two decades of association with everyone there. I thought if I rang for a hospital emergency ambulance, it would take 30 minutes to come and another 30 minutes to reach the hospital. So I rang my sambandhi, relative by marriage, who had a hospital nearby. He came within minutes with his ambulance.

By now she was in deep coma, her body flaccid. We carried her to the ambulance. Our target was to reach the Emergency Room before she threw fits due to the bleeding in the brain.

In ten minutes the cath lab team said there was no more bleeding. I knew what lay ahead. She needed surgery to let out the accumulated blood compressing the vital structures of mid-brain.

My son, a cardiologist based in Bengaluru, was yet to arrive, my daughter was with her recently delivered twins, and my mother is 85 years. I had to take the call myself, to go ahead with emergency neurosurgery. I missed the counsel of my father, a doctor too. I signed the consent form. She was wheeled into the theatre.

The odds stacked up

I came to the waiting area where I found my son and wife waiting. My daughter was sobbing at one end of the room. I consoled them saying we had come on time. But my son and I knew the odds were high on her making it. There were prayers for her on virtually every lip.

By 8 a.m. the surgery was over and the neurosurgeon, very tense, told me they had done ‘burr holes’ in the skull and let out blood. Some of it had clotted and they had started thrombolysis medicine to dissolve the clots slowly through an external ventricular drain. This left the brain exposed where the drainage tubes were. The clots cannot be cleared in one cycle. Exposing the brain to the outside is dangerous because of chances of infection. She was rolled into the ICU with barrier nursing. In the ICU she was in intensive care on ventilator support, with continuous monitoring of vital parameters, especially to see that the cerebro-spinal fluid, initially dark red, was getting irrigated with medicines to quickly dissolve the clots.

After three days the neuro team wanted to check the MRI to see the effect of surgical drainage and the state of the clots. The MRI report showed much residual blood and clots compressing the brain. It was marginally better, but the clots had only been partially dissolved. The neurosurgery team decided to repeat thrombolysis.

Eventually they did five cycles in a span of two weeks and slowly the clots were dissolved. But my wife was still in deep coma.

After eight days of ventilator support, a good friend came and asked me if we could do a tracheostomy for ventilation and toileting the lungs. It was an elaborate procedure: took 45 minutes.

My son and daughter-in-law, who were like a medical audit team reviewing the charts and asking questions about the modalities of treatment, were worried about the time it was taking. It was 15 days since the surgery, but there was no sign of any improvement and I worried.

Putting on a bold face

Day 20, and still no improvement. The family was scared, so was I, but I did not entertain negative thoughts. I counseled my children and put on a bold face. Physiotherapy and Ryles Tube feeding continued. She would have lost at least 15 kg. The major treatment was physiotherapy and nursing and ensuring she did not develop any bed sores. It was all hard labour on the part of the nursing sisters.

On Day 22, she winced when pinched. It suddenly raised hopes and spirits. Slowly, with great difficulty, she opened her eyes and recognised her children. It was my day; I had got her back.

On Day 27, she was shifted to a private room. She was physically weak and had no control on bladder and digestive functions. She used to feel helpless and at times ashamed. We needed everyone’s help, particularly the family’s, to infuse confidence in her. A vital part was played by a young physiotherapist, who took it as a personal challenge to rehabilitate her. It took two years to get her back. I don’t think it would have been possible anywhere outside India.

During the hospital stay I suddenly realised I had little medical insurance cover. The family pitched in as best it could. Then the management waived the rest.

When she got discharged, a classmate from Singapore called me and said the theoretical possibility of survival had become a reality only by God’s grace. And it was indeed an act of God.

The author is a Professor of Cardiology and a former Vice-Chancellor of Sri Ramachandra University, Chennai.