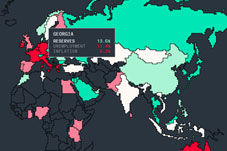 The map is made according to 29 indicators, including financial, economic and political risks that investors face.

Four main components are allocated on the map: reserves, unemployment, inflation and currency volatility in a particular country.

The general risk indicator is assessed from 0 to 100. The higher the percentage, the lower the risk is.

According to the map, the unemployment risk factor in Georgia has been assessed with 11.4%, inflation with 6,2% and reserve stockpiles with 13.6%.

“They effectively act as a cushion against economic shocks, such as hyperinflation and currency depreciation, that could be triggered by external or internal events,” Bloomberg says.

As for unemployment, the 2017 estimates by the International Labor Organization for those in the labor force apply to people aged 15+.

“Unemployment can serve as a proxy for the overall health of the economy. Long-term high unemployment levels eventually lead to less spending power among consumers, lower tax revenues for governments and possible social unrest,” Bloomberg reports.