LOS ANGELES —  Usain Bolt and Michael Phelps towered over the 2016 Rio Games, capping an era of sustained excellence that promises to reverberate through the 2020 Tokyo Olympics and beyond.

From Beijing in 2008 through London 2012 and, finally, in Rio, Bolt and Phelps captivated both die-hard fans of their sports and casual spectators attracted like moths to the Olympic flame.

More importantly, they inspired a legion of young competitors determined to flourish on sport’s biggest stage even as Olympic officials grapple with soaring costs, corruption and the ever-present spectre of doping.

“It’s not even once in a generation — it may be once in 10 generations that someone like Michael comes along,” said Bob Bowman, the coach who nurtured Phelps from an age-group phenomenon to an Olympic superstar whose five gold medals in Rio took his already stunning tally to 23 gold among a total of 28.

The same could be said of Bolt, who has dominated in the tests of speed that are the quintessential sporting contests, maintaining his supremacy over an unprecedented span of years.

“I’ve proven to the world I’m the greatest,” declared the ebullient Jamaican, who preens and poses with the same unabashed ardor with which he raced to three Olympic sprint trebles.

Both Bolt and Phelps presaged their mature exploits with precocious Olympics appearances, Phelps as a 15-year-old contesting the 200m butterfly in 2000, and Bolt, at 17, finishing fifth in his heat in the 200m in 2004.

By those Games in Athens in 2004, Phelps was already challenging Mark Spitz’s record of seven titles at one Games, coming away with six golds and two bronze.

In Beijing Phelps cemented his place among Games greats with a perfect eight golds in eight events at the Water Cube while Bolt electrified the Birds’ Nest stadium with his 100m, 200m and 4x100m sprint triumphs.

From Beijing on they were linked in Games lore, each adding to his legacy in 2012 — Bolt with another sprint sweep and Phelps with four more gold to add to his staggering tally of Olympic medals.

Although a burned-out Phelps flirted with retirement after London, it was fitting that his decision to return for one last, fifth, campaign, saw him bow out at the same time as Bolt.

The Jamaican’s unprecedented third sweep of the 100m, 200m and 4x100m means debate will rage loud and long as to which can claim the status of “greatest Olympian”. 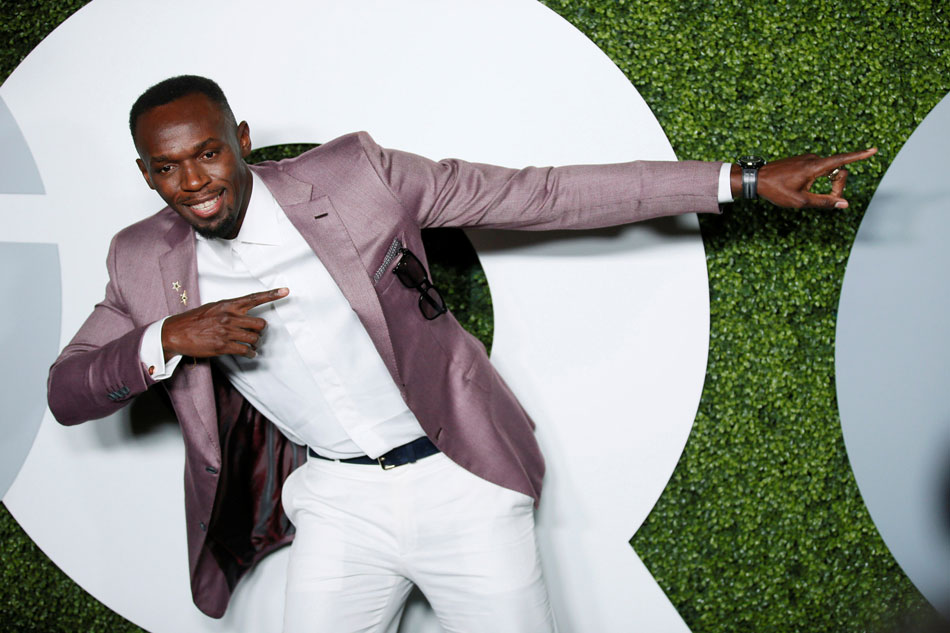 Jamaican sprinter and GQ Man of the Year Usain Bolt poses at the GQ Men of the Year Party in West Hollywood, California, December 8, 2016. Photo by Danny Moloshok, Reuters

Already in Rio, dozens of rising swimming stars cited Phelps as their inspiration.

That included Singapore’s Joseph Schooling, who bested his idol in the 100m butterfly to claim his country’s first-ever Olympic gold in any sport, and Adam Peaty, who twice broke his own 100m breaststroke world record to become the first British man in 28 years to win Olympic swimming gold.

“No matter what country you swim for, you’re indebted to Michael Phelps,” US backstroker Ryan Murphy said. “He’s opened a lot of doors for all of us.”

Bolt’s influence is just as broad.

“I will say that it is an absolute pleasure to be able to compete in the same era as Usain Bolt,” said America’s two-time Olympic decathlon gold medalist Ashton Eaton.

Eaton isn’t among the doom-sayers worried that Bolt’s departure from the track — after an extended victory lap in 2017 — will leave a void that can’t be filled.

“I really disagree he’ll leave a vacuum,” Eaton said. “If anything, he’s provided a platform for all the other young, aspiring athletes to launch from.

“Just now we’re not seeing the fruits of his accomplishments and labor, but I think in the years to come you’ll see a lot of young athletes who’ll say ‘I got inspired by Usain Bolt’.

“When I got inspired by Michael Johnson I was eight years old and I didn’t start coming into fruition in track until I was 18,” Eaton said, “so give it a decade.”