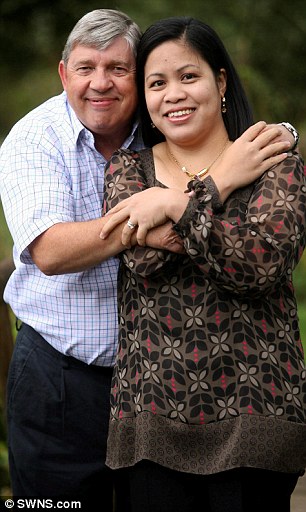 Britain’s most married man has been given a restraining order after harassing his eighth wife as he tried to stop her divorcing him, a court heard.

Ron Sheppard, 68, of Martock, Somerset, bombarded Weng Plantino, 36, with presents, letters and Facebook messages in a desperate attempt to rekindle their relationship.

The harassment forced Ms Plantino to move house and leave the church where she had made ‘true friends’, it was heard.

When Sheppard’s advances failed he turned to intimidation, telling Ms Plantino was ’99 per cent likely’ the case against him would be thrown out and she could be arrested for perjury.

He has since proposed to Cristel Marquez, a Filipina call worker who is 40 years his junior.

Sheppard pleaded guilty to harassment and was handed a £607 fine at Yeovil Magistrates Court.

He was also given a two year restraining order banning her from directly or indirectly contacting Ms Plantino, who was named in court as Rowena Sheppard.

In a victim impact statement read to the court by the prosecution, Ms Plantino said she felt ‘scared and like he was watching everything I did’.

She even fled her home in Summertown, Somerset, leaving behind friends and the church group she had joined.

The statement said: ‘I don’t know why he won’t stop contacting me and leave me to get on with my life. People there [the church] have become true friends and I had to leave them all behind.’

Most married man: Ron Sheppard outside Yeovil Magistrates’ Court in Somerset today, left. Right, Sheppard with Ms Platino on their wedding day on the Isle of Wight in 2004 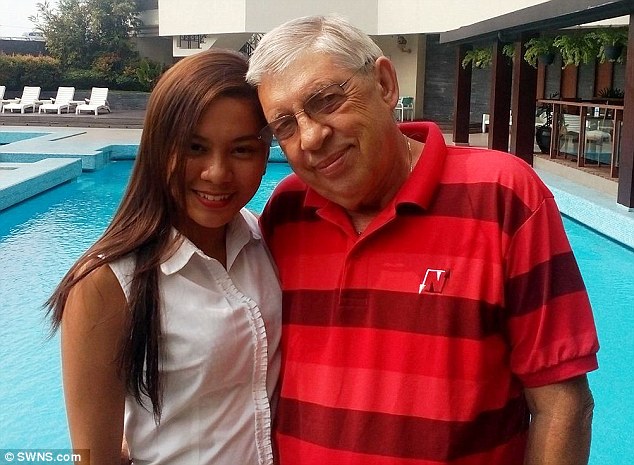 Defending Sam Morton said he client pleaded guilty at the earliest opportunity and accepts the length of the restraining order.

He also pleaded with the judge to allow Sheppard to able to continue attending St Clair’s Church in Summertown as that is where his support network is, which the judge accepted.

Sentencing Sheppard, district judge Dave Taylor said: ‘No matter what might have been your experiences of matrimony in the past, it seems to me you were unable to accept and give up this is a relationship at an end. 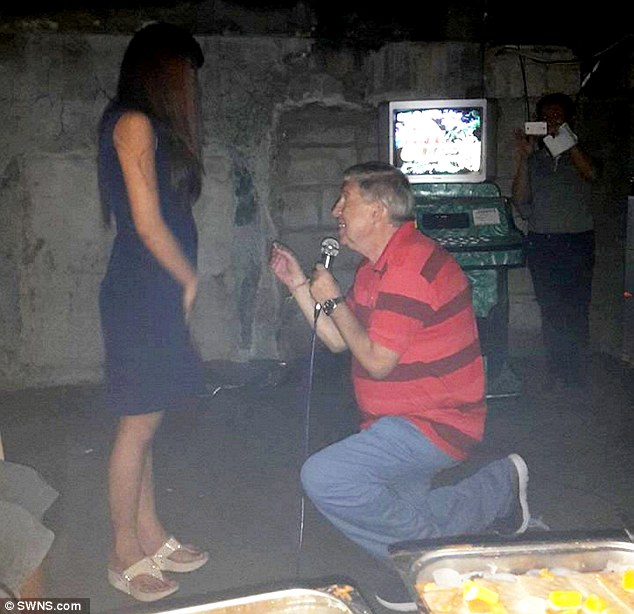 Next step: Sheppard proposing to Miss Marquez, who is set to become his ninth bride

‘You won’t be the first or last who has been unable to deal with the affects of a relationship breakdown.

‘The way you conducted yourself did cause actual and real distress to Mrs Sheppard. It does not surprise me to hear from her she felt she needed to leave the area.

‘She felt alone and isolated by your conduct. You caused Mrs Sheppard real harm.’

After passing sentence Sheppard told the judge: ‘I would just like to apologise to my wife and apologise to the court.’

Speaking after the hearing, Ron dismissed everything heard in court as ‘lies’.

He said: ‘I wouldn’t want patch things up now, even if I could meet her. There is too much water gone under the bridge. She has done so much to me mentally and walking out on me. At the moment I’m angry. She has ruined my life.’ 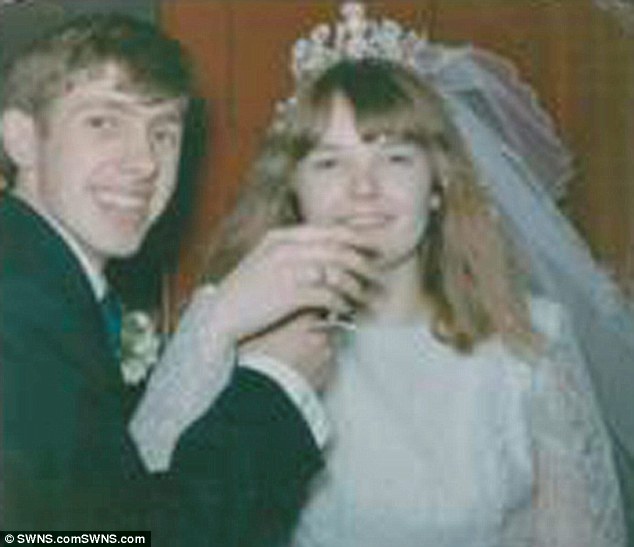 First bride: Sheppard was just 19 when he married first wife Margaret in 1966, pictured 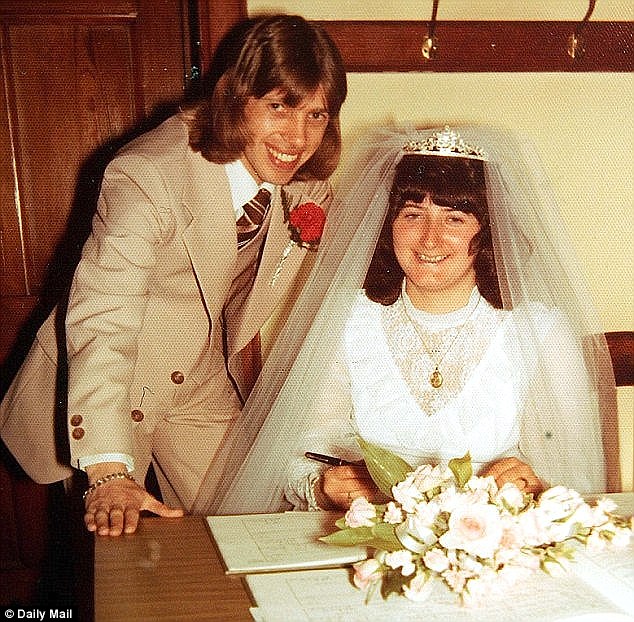 Bride number three. Mr Sheppard wed Lesley in 1976 and the couple had two sons together during their five-year marriage, which ended after a string of arguments

He is now focused on his relationship with Miss Marquez and is working to bring her over to Britain from the Philippines.

He said: ‘I need Cristel here to take my mind off things. Every time I look around the house, sometimes I can hear her, hear her calling me.

‘I have been alone for ten months. I have never been alone in my life.’

He added: ‘I’m still looking for love. I have got Cristel but we have never made love or anything together as she doesn’t believe in it until after marriage.

Wife No 1: Margaret in 1966. Had three children and divorced after two years.

Wife No 2: Jeanette, married in 1973 and divorced after just one year together. Sheppard later described the union as a ‘business transaction’.

Wife No 3: Lesley, wed in 1976. He left five years later following a string of arguments. The couple have two sons.

Wife No 4: Kathy, met in a holiday camp and they married in 1982. They had a daughter and lasted four years.

Wife No 6: Usha, wed in 1999. They split after four years when Sheppard cheated on her while in Thailand.

Wife No 7: Wan. The couple met in Bangkok in 2003 and married that year. The pair were in the UK together for just eight months when Wan left him and returned to her home country.

Wife No 8: Weng, married in 2004. The pair met online and Sheppard flew out to the Philippines. The couple were together for 11 years and split in 2015.

‘I’m just trying to find the money now to get Cristel over here now.’

Sheppard was just 19 when he tied the knot with first wife Margaret in 1966 and the pair had two children together before divorcing two years later.

He then met second wife Jeanette in a Kingston bingo hall and they wed in 1973, but it lasted one year. He has since described the marriage as a ‘business transaction’ which enabled them to receive a bigger house from the council.

Shortly after their divorce, Mr Sheppard met third wife Lesley and in 1976 they tied the knot. They went on to have two children together and he said he thought she ‘was for keeps’, but he left five years later following a string of arguments.

He went on to meet 18-year-old blonde Kathy at Pontins holiday camp in Somerset and the pair married in 1982. They had a daughter together and lasted four years, despite Mr Sheppard claiming it was a ‘rebound relationship’ following his split from Lesley.

He then met his fifth wife Sue at a bingo hall. Despite admitting he was not ‘swept off his feet by her’, he moved in to her two-bedroom home and they married in 1986. They had two sons together but she threw him out when he was offered a job in Bournemouth.

He then went on to marry Usha in 1999, after the pair met while he was on a stop-off trip to Singapore. They lasted four years but split after Mr Sheppard cheated on her during a holiday alone to Thailand.

With divorce number six behind him, he met seventh wife Wan in Bangkok in 2003 during a trip to visit an old friend.

However, after returning to the UK, the pair stayed together for just eight months before the bride announced she was returning to her native country in 2003.

It was then Mr Sheppard met Weng after meeting her online. He flew out to meet her in the Philippines.

The couple instantly clicked and married on the Isle of Wight in November, 2004.