This marks the thirty-second year for Exercise GOLDEN COYOTE, one of the longest-running and largest National Guard exercises in the United States. It is an annual, joint, multi-national exercise, hosted by the South Dakota Army National Guard and conducted in cooperation with the U.S. National Forest Service and Custer State Park.

Approximately 4000 military personnel from Canada, Denmark, Singapore, Suriname, the United Kingdom, and the United States will be working together to create invaluable training experiences as well as demonstrate the interoperability between allied militaries. This exercise allows units to conduct combat support and combat service support missions in a realistic training environment and will include the conduct of real-time engineering missions.

Participation in exercises such as Exercise GOLDEN COYOTE contributes to the operational readiness of the Canadian Armed Forces, which in turn will allow the CAF to meet the likely tasks that the Government of Canada will assign.

“The Army Reserve within 3rd Canadian Division have greatly contributed to the success of both domestic and international operations. Exercise GOLDEN COYOTE provides a new and unique opportunity for our soldiers and leaders to operate in a challenging environment within a multi-national setting, while building new skills and experiences.”

“Exercise GOLDEN COYOTE 16 offers a challenging and realistic training environment that will build the agility and resiliency of our personnel, as well as develop essential skills and procedures that enhance interoperability, readiness and communication with our allies and good friends in the U.S. National Guard.” 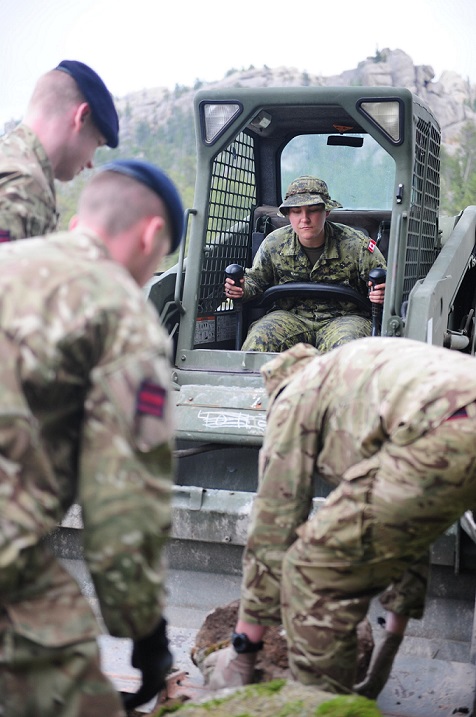 A Soldier of the 33 Territorial Battalion Group of the Canadian Army Reserve operates a skid loader as soldiers of the United Kingdom’s Army Reserve Regiment, 71 Royal Engineers, based out of Scotland and Northern Ireland, load rocks into the bucket during the 31st Golden Coyote training exercise at Sylvan Lake, South Dakota, June 10, 2015.