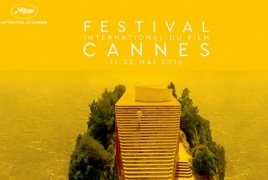 PanARMENIAN.Net – There are no American features to be found in Critics’ Week at this year’s Cannes Film Festival, as the parallel section dedicated to first and second films will privilege European productions — alongside movies from countries as far-flung as Turkey, Lebanon, Cambodia and Singapore, Variety reports.

The 55th edition of Critics’ Week will kick off on May 12 with Justine Triet’s “In Bed With Victoria,” a light-hearted, frank and contemporary comedy about a young single mother (played by Virginie Efira) trying to find the balance between her career and her love life. According to Critics’ Week artistic director Charles Tesson, this sophomore offering from the Cesar-nominated director of “Age of Panic” (which opened in the ACID section in 2013) underscores a willingness to shake up the sidebar and marks a change in tone from the typically serious-minded movies that constitute the rest of the section.

The Critics’ Week selection committee sifted through 1,100 feature-length submissions in order to come up with the final 10, which include six feature debuts and four sophomore outings.

Addressing the absence of features from the American continent at Critics’ Week (after last year’s four entries), Tesson explained his disappointment with trends he saw at this year’s Sundance. “After launching films such as ‘Take Shelter’ and ‘It Follows,’ it’s possible that we’ve raised the bar too high for American movies, and we were more inspired by movies coming from France, Southern Europe, Asia and the Middle-East that allow us to explore uncharted territories,” said Tesson.

The selection entails various films that touch on current issues in a cinematic and original way, for instance Mehmet Can Mertoglu’s “Album,” about deep-rooted prejudice in Turkey, Vatche Boulghourjian’s “Tramontane” about a blind man on the trail of his origins in post-war Lebanon, and Kesavada Rajagopal’s “Yellow Bird,” an unusual portrait of Singapore torn by conflicts between Chinese and Indian communities.

Tesson said the French directors of this year’s lineup, notably Julia Ducournau with “Raw,” Jean-Christophe Meurisse with “Apnee” and Justine Triet with “In Bed with Victoria” are bold and innovative in their own ways. “Apnee,” for instance, is an omnibus feature laced with surreal, ferocious humor looking at today’s French society.

Closing night will consist of three short films from actresses making their directorial debuts: Sandrine Kiberlain’s “Smile,” Laetitia Casta’s “En moi” and Chloe Sevigny’s “Kitty” — the latter being the lone American to be found in a lineup that is framed by female talent.

Tesson said “all three shorts work well together as if they dialogued with each other,” sharing the themes of acting, womanhood and transformation.

The competition boasts just one other distaff-directed feature, the cannibalism-themed “Raw” from French helmer Julia Ducournau, who won a Critics’ Week prize for her short “Junior” in 2011. Her latest centers on a 16-year-old (Garance Marillier) who makes a radical break from her family’s vegetarian ways after sampling flesh during her first day at veterinary school.

A symbol of its 50+5 edition, Critics’ Week will play the shorts of two filmmakers who were discovered at the Cannes sidebar: Cesar Agusto Acevedo with “Los Pasos de agua” and Nadav Lapid with “From the Diary of a Wedding Photographer.”

“One Week and a Day” (Asaph Polonsky, Israel). First film.