Celebration of nature at Arjangarh Metro 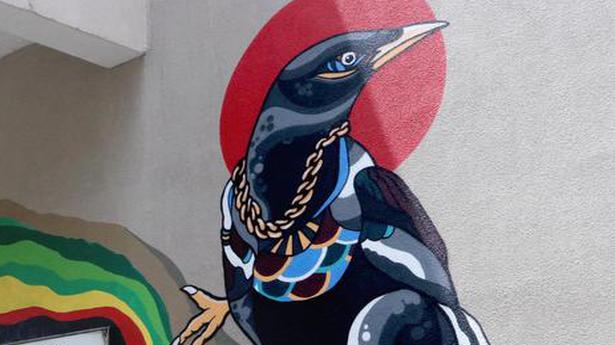 The Arjangarh Metro station on Delhi Metro’s Yellow Line (Samaypur Badli – HUDA City Centre) is all set for an artistic makeover with Indian and international artists painting various illustrations across the walls of the station on themes related to environment.

The Delhi Metro has tied up with St+art India, a non-profit organisation working for the promotion of street art, for the project. A similar initiative was carried out at Govindpuri Metro station on the violet line (ITO-Faridabad) in tie-up with the same organisation.

Placed on the Mehrauli highway, Arjangarh Metro station is an important connecting bridge between south Delhi and Gurugram. The project at Arjangarh is a collaboration among artists from India, Singapore and Mexico. The curatorial approach brings together these artists with their distinctive styles to convey their interpretation of the local flora and fauna of India. The work has already started with two Singapore-based artists — Sam Lo and Soph O — painting a “gangsta version of the Myna, which is also seen commonly in Delhi”. Mexican artist Senkoe and Indian artist Nilesh are also part of the project.

The artists will also try to present the fauna of the region in the backdrop of Delhi’s urban surroundings.

As part of the initiative, St+art India Foundation will maintain the artworks for the five years, after which they may be repainted or original finish will be restored.

The Delhi Metro utilises its spaces for the promotion of art, culture and heritage. Apart from having a museum inside the Patel Chowk station, DMRC has installed decorative panels, artworks at various stations such as Mandi House, Janpath, ITO, Udyog Bhawan, INA, Jor Bagh, Green Park among others.

The ‘Art Stations’ is an endeavour by St+art India Foundation and Asian Paints to transform transit spaces into walk-in galleries for the public with the support of DMRC and Singapore High Commission.