MUMBAI:The sell off in global financial markets gathered pace on Monday on heightening worries that central banks may reverse the easy monetary policy stance that has buoyed asset prices in the past few years.

Stock benchmarks fell 1.6% on Monday after dropping almost 1% on Friday and the rupee weakened further, mirroring the sell off overseas, as renewed speculation about a rate increase in the US next week spooked investors, pushing up bond yields and forcing a shift to safe-haven assets such as gold. 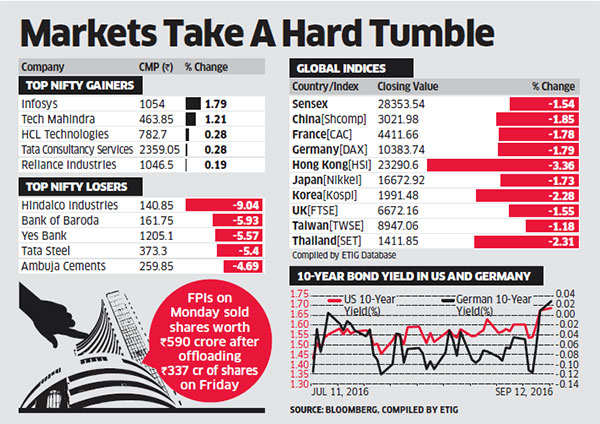 “There is realisation somewhere that central banks, whatever role they had to play in stabilising the markets after the global financial crisis, that is over,” said Sanjeev Prasad, senior executive director at Kotak Institutional Equities. “Now if asset prices have to go up, they have to go up on the back of earnings and real fundamentals.”

Extending losses to the third straight day, the rupee on Monday closed at 66.93 to a dollar, down 0.37%, or 25 paise, over its previous close of 66.68. During the day, the currency touched a low of 66.96 but rebounded following the Reserve Bank of India’s intervention. Some state-owned banks were seen selling dollars at the 66.90 level, dealers said.

Mid- and small-cap stocks, which have outperformed benchmarks in recent months, took a bigger hit on Monday. The BSE Midcap index slumped 3% while the BSE Smallcap fell 2.3%. “I am not surprised that midcaps have corrected more. The markets are still overvalued. Midcaps are overvalued by 30-40% and large-caps are overvalued by 10-30%,” said Prasad of Kotak Institutional Equities.

In Europe, bond yields rose on Monday with 10-year benchmarks of Portugal, Spain and Italy advancing to near-two-month highs. Bond yields and prices move in opposite direction. After ECB, a chorus of comments from US Fed officials has raised fears of rate-tightening.

On Friday, US Federal Reserve Bank of Boston President Eric Rosengren said the American economy could overheat should policy-makers wait too long to tighten. The market will watch Fed Governor Lael Brainard’s remarks on Monday for further hints on interest rate direction.

FEARS OF FOREIGN FUND PULLOUT
Investors are worried that foreign funds would be tempted to pull money out of emerging markets at this juncture as many feel the market has run up too fast, too soon. Foreign portfolio investors (FPIs) sold shares worth Rs 590 crore on Monday. They had off loaded stocks worth Rs 337 crore on Friday. From the start of September till Thursday, FPIs had pumped Rs 1,900 crore into Indian stocks.

Overseas fund managers said India will track any weakness in global markets, but remain bullish about its prospects. “India should do well versus most equity markets over the next few quarters. Indian fundamentals are stronger in terms of growth outlook,” said Ashish Goyal, Singapore-based head of emerging markets equity at NN Investment Partners.

Gold held steady while oil prices fell for the second straight day on Monday following increasing oil drilling activity in the US.

Previous 【总理出访全镜头】一次南海外交角力的胜利
Next Business Beat: Physical addresses, e-Commerce and the paradox of majuu'