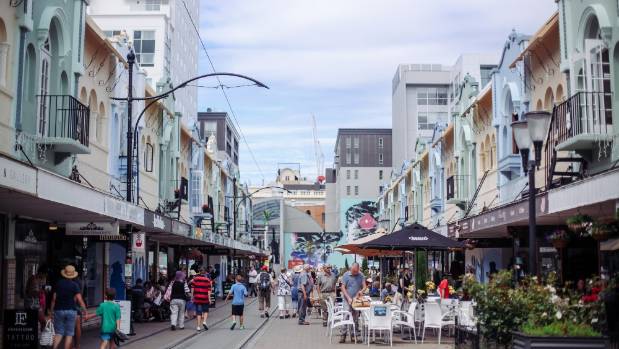 New Regent St is a popular destination for both international and domestic visitors to Christchurch.

Statistics New Zealand data for September shows year-on-year domestic tourism spending has dropped three per cent in Canterbury, one of the worst results in the country.

Across the South Island, the year-on-year domestic tourism spend dropped just 0.6 per cent, with Nelson and Otago both showing growth.

In Canterbury, domestic visitors provided almost 60 per cent of Canterbury’s $3.3 billion tourism income for the year to September.

Christchurch and Canterbury Tourism chief executive Vic Allen said there was a nationwide downward trend over the winter. “It’s hit Christchurch perhaps a bit more than some other centres,” he said.

“The trend started in May of domestic spend declining a bit compared to the previous year.”

Allen said cheap flights to Australia, the Pacific Islands and the United States meant people were looking outside of New Zealand for their holidays.

“If you look at the figures for outbound travel for kiwis you’ll find that they’re up about 10 per cent,” he said.

“Kiwis have been choosing to travel overseas for holiday rather than domestic. That’s a pretty clear correlation, really.”

Allen said skiers from the North Island and overseas tended to go to Queenstown rather than Mt Hutt.

“I agree that we cannot rely on skiing alone to bolster domestic visitor spend in off-season months. Other ways to attract domestic visitors in the cold months include major events and conferences, which will increase rapidly as the anchor projects come to fruition over the next few years.”

Allen said he did not think Canterbury’s corporate tourism market was suffering.

“The conference market is pretty buoyant, and remember the economy of New Zealand is quite buoyant, so I would expect that meetings and conferences and such would be continuing to be quite strong.”

He said the cheaper international flights were a “side effect” of Christchurch Airport’s effort to attract more international aeroplane services.

“The resulting increase in overseas visitors more than compensates for the loss of domestic visitor in terms of visitor spend.”

Total tourism spending in Canterbury was up five per cent for the year to September, propped up by a 19 per cent increase in international spending.

“Lower airfares makes travel more affordable for everybody in the world, but it’s more to do with just a continuation of the boom that we’ve been seeing for the last year or two.”

“Christchurch Airport Company has had some good successes lately in attracting new services into Christchurch, and that’s looking strong over this next summer. So that’s certainly put Christchurch on the map.”

Last week, Christchurch became the smallest city in the world to receive a daily service from an Airbus A380, the biggest passenger plane in the world.

The Emirates service flies to Dubai via Sydney.

The island saw a 5 per cent year-on-year growth in total tourism spending, with $8.5b spent in the year to September.