China Changes the Way It Manages Yuan After Currency’s Jump

China’s central bank has made a change to the regime used to manage the yuan, effectively removing a component used by banks to calculate their submissions to the currency’s daily reference rate, according to people familiar with the matter.

The People’s Bank of China recently told some lenders that contribute to the rate — known as the fixing — to adjust their use of the “counter-cyclical factor” in such a way that it would have no impact on the mechanism, said the people, who asked not to be identified as the details are private. They said the change has already taken effect.

The yuan, which headed for its biggest drop in two months on the news, is allowed to move a maximum of 2 percent either side of the fixing. Analysts said the change shows China is confident in the yuan’s current trajectory, which has been one of steady appreciation. 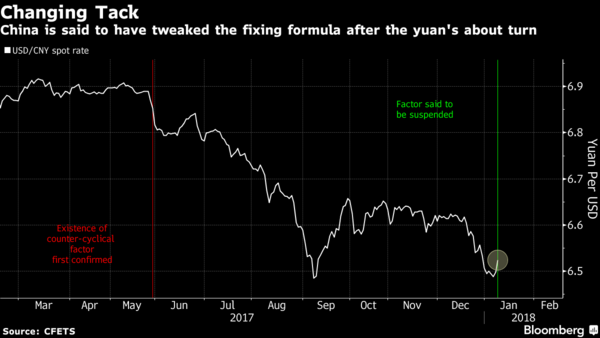 China introduced the counter-cyclical factor last year in a bid to reduce volatility in the yuan, which had weakened for three straight years, triggering the introduction of capital controls.

Market watchers said it gave the PBOC more control over the currency, but undermined earlier efforts to make the yuan more accessible and market-driven. Greater control over the fixing — along with a steady economy and a retreat in the dollar — helped ignite a rally in the yuan in the second half.

“This is not surprising as the expectation for depreciation has waned,” said Raymond Yeung, chief greater China economist at Australia & New Zealand Banking Group Ltd. in Hong Kong. “This suggests that the authorities expect to see the exchange rate to float within a reasonable range in the near term.”

In an email to Bloomberg News, the PBOC said that it’s up to the banks that contribute to the fixing to handle their own calculations. Lenders look to fundamentals when determining adjustments to the components that make up the factor, the central bank said.

The factor counteracts sentiment-driven volatility in the market and the potential for “herd behavior,” China Foreign Exchange Trade System, which falls under the central bank, said on its website around the time it was introduced.

It’s also typically been seen as a tool to address yuan depreciation without draining foreign-currency reserves. Goldman Sachs Group Inc. estimates that on most days since October, the fixing ended up stronger after the factor was incorporated.

The onshore yuan fell 0.4 percent to 6.5258 per dollar as of 6:28 p.m. in Shanghai, set for its biggest one-day decline since Nov. 3. Offshore, the currency dropped 0.5 percent, the most since September. The change to the fixing is likely to boost volatility in the currency as it will allow for great flexibility, analysts at Nomura Holdings Inc. said.

The yuan’s strength over the past year paved the way for the policy shift. With the dollar in a protracted decline, outflows from China have slowed resulting in the yuan’s turnaround. The currency strengthened for the first time in four years in 2017, and reached a four-month high on Monday.

Until this shift, the yuan’s fixing was calculated based on the previous day’s closing price as of 4:30 p.m., its moves against a basket of currencies, and the counter-cyclical factor. The latter counteracted the impact of the previous day’s trading and any significant currency moves globally, people familiar with the matter told Bloomberg last May, thereby curbing excessive volatility.

The easing in depreciation pressure has allowed China to take a step toward making yuan trading more market-based.

“This is one direction to go — and an easy way out — if the authorities want to proceed with FX reform,” said Frances Cheung, head of Asia macro strategy at Westpac Banking Corp. in Singapore. “The recent yuan fixing pattern also suggests that the factor has not been utilized. That said, they reserve the flexibility to re-deploy the CCF if needed.”
Source: Bloomberg