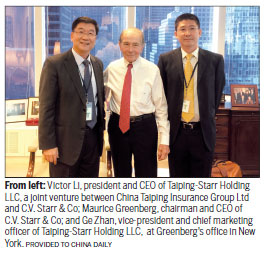 As a Chinese company entering America’s mature insurance market, China Taiping found its own niche – the growing number of Chinese companies that do business in the United States.

The Chinese state-owned financial and insurance group also found a partner – New York-based insurer C.V. Starr & Co, which is led by Maurice Greenberg, former chairman and CEO of American Insurance Group and an old friend of China who contributed to the development of the country’s young insurance industry.

China Taiping and C.V. Starr teamed up to form a joint venture. With a majority stake, China Taiping Insurance Group Ltd is the holding company of the Delaware-registered Taiping-Starr Holding LLC.

“We have been planning to enter the US since 2014. Our expansion corresponds with China’s ‘going out’ policy that has led to the boom of Chinese investment in the US,” said Victor Li, president of Taiping-Starr. He was the CEO of Taiping’s subsidiary in Singapore.

Founded in Shanghai in 1929, Taiping is the oldest insurance company in China. In 1956, Taiping and a few other Chinese insurance companies merged to become the People’s Insurance Company of China (PICC), as a part of China’s nationalization of the industry.

In 1998, when PICC was again split into four state-owned Chinese insurance companies, most of the overseas business became a part of Taiping. As a result, Taiping has an extensive international presence, with offices in Singapore, New Zealand, Indonesia, the United Kingdom, Holland, and now, the US.

The company, headquartered in Hong Kong, has 200,000 employees and 24 subsidiaries worldwide.

The Taiping-Starr joint venture received a thumbs-up from the Committee of Foreign Investment in the United States (CFIUS). Li and his team of people from both companies now work at the C.V. Starr headquarters in Midtown Manhattan.

Chinese insurers have been mostly focusing on real estate investment in the US rather than the insurance business, and when they do look for insurance opportunities, it’s usually through acquisitions.

China Taiping is the first Chinese insurer stepping into the US insurance market by starting a company.

“We eyed the opportunity of serving Chinese companies because we speak their language and understand their needs,” Li said. “They know who we are, and they can trust us. Some have been our clients in China or elsewhere.

“And we can’t ask for a better partner,” he said. “Greenberg understands how things work in China and he likes China.

“The US insurance market is much more mature than ours. It’s amazing that we can consult our Starr colleagues on things from quotations to legal compliance in different US states,” Li said.

Taiping Asset Management, an offshore subsidiary of China Taiping, invested $229 million for an equity stake in a Manhattan luxury condo project, 111 Murray Street. The 792-foot-tall tower is scheduled for completion in 2018 and will include 157 condos over 58 stories, according to The Real Deal.