China has been the world’s largest oil consumer since 2011 and became the biggest crude oil net importer in 2015. And while the rest of the world has struggled to run down crude oil inventories, it has continued to build up stocks.

The Middle Empire has built increasing clout in the global oil markets, with domestic demand surging more than five-fold from 1990, to 12.4m bbl/day, and crude oil imports growing at a double-digit rate in 2017.

As a result, China has taken the driver’s seat of global energy demand growth, given the glut that has plagued the markets since late 2015.

The country has shown a steady concern for its growing import dependency and the potential vulnerability of its oil supplies. And its rising thirst for oil has closely dovetailed the structural reforms of its domestic oil industry, in particular the emergence of competition in the Chinese downstream segment under the guise of independent refiners, known as ‘teapots’ because of their size and shape.

Initially, teapots were granted crude import quotas to offset the decline of domestic production and have become a new engine of Chinese demand growth. By the end of 2016, 19 independent refineries had been granted quotas totalling an estimated 1.5m bbl/day.

As imports swelled, so did the production of refined products. With over 24m new petrol cars on Chinese roads in 2016, the demand for gasoline has remained robust. However, demand for diesel has weakened somewhat, less as a result of weakening growth than of the state’s attempts to curb air pollution.

China has been filling it strategic petroleum reserve (SPR) and with the increased presence of teapots on the international oil markets, investors have become increasingly wary that a slowdown in Chinese crude intake, as a result of full storage capacity or reduced quotas for the teapots – or both – could be detrimental to global oil demand.

The SPR has been planned to be developed until 2020 to contain the equivalent of 90 days’ worth of oil net imports, or about 720m barrels of crude. Based on implied supply calculations, ICIS estimates that about 683m have already been stored, the majority in above-ground tanks in crowded coastal regions.

According to the Energy Information Administration (EIA), China – along with India – is expected to be one of the largest contributors to non-OECD crude oil consumption growth, with Chinese demand forecast to increase by 400,000 bbl/day annually in 2016 and by 300,000 bbl/day in the 2017 year to date. The EIA forecast another 300,000 bbl/ day increase in 2018.

A larger use of gasoline, jet fuel, and hydrocarbon gas liquids (HGL) has boosted the country’s petroleum consumption, overtaking the US in 2017.

After shooting up to 9.2m bbl/day, imports have come down, to about 8.2m bbl/day. A declining production at China’s main oilfields such as Daqing and Shengli, along with lower oil prices, has provided further incentives to buy crude oil from the international market rather than producing it domestically at a higher cost per barrel.

As a result, domestic production covers only a third of Chinese oil demand. Although consumption growth has slowed, it was still up by 2.9% in the first seven months of 2017, somewhat decelerating from the 3.25% and 6.4% growth posted in 2016 and 2015, respectively, according to ICIS calculations. 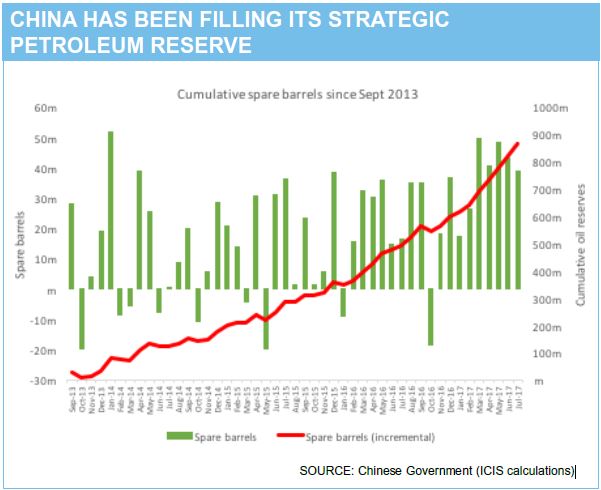 Regardless of the SPR filling level, China is set to remain the biggest oil user in the next 10 years. Therefore, China’s imports will keep growing, no matter the 160,000 electric vehicles put on the roads in 2016, and no matter the government’s efforts to reduce pollution.

In a country that counts nearly 1.4bn inhabitants, freight and air traffic is bound to grow rapidly to keep pace with the current economic expansion.

Russia has been China’s main crude supplier for most of 2017 and seems to be stepping up the stakes with CEFC repurchasing the Rosneft stake from the Glencore/ Qatar consortium. Here again, the participation of a little-known Chinese oil company marks a departure from the traditional monopoly of PetroChina, Sinopec and the China National Offshore Oil Corporation (CNOOC) in the purchase of foreign energy assets.

There has also been speculation that China might buy into Aramco’s IPO next year, or even buy the Aramco 5% that’s being put for sale outright in a bid to secure a substantial part of its oil needs. Holding shares from a company that owns the world’s lowest-cost reserves might be a good way to achieve that. And not an extravagant one in light of China’s penchant for foreign acquisition.

This would also be consistent with the Kingdom’s involvement in China’s growing refining sector, building on the investment in Fujian and the recently announced $10bn joint venture at Panjin in the northern province of Liaoning.

A long-term supply deal with China may simplify the due diligence process on Saudi Arabia’s oil reserves. On the downside, Beijing may prove a reluctant shareholder if any signs of regime instability materialise in Riyadh.

China may also choose to play Russia off against the Saudis with the aim of getting the cheapest possible supply. If the current glut persists, any such attempt may further depress global oil prices.

In February 2015, in the government’s bid to stir competition and private investment in its domestic oil market, those non-state refiners were granted crude import quotas, allowing them to import oil directly instead of buying it from a licensed importer, namely one of the three Chinese state-owned oil companies: CNPC, CNOOC and Sinopec.

This was a significant change, not only in terms of market structure, where Sinopec had hitherto concentrated the bulk of refining capacity, but also in terms of market dynamics, with an increased number of participants to the crude oil market.

It is, therefore, no surprise if teapots have become an engine of crude oil demand growth in China, attracting the interest of big oil producers and in turn winning an assiduous courtship from international traders.

Those teapots have since been scouring the regional markets (as far as Angola) to buy crude and expand their business. Until such import quotas were granted, they used to bargain with the country’s national oil companies (NOCs) for crude supplies. Since July 2015, 12 licences or 17 import quotas have been granted and teapots have since launched into a somewhat chaotic crude buying spree.

From backward and unsophisticated, some of those refiners have gradually upgraded and modernised their operations (Dongming Petrochemicals for example), and broadened the scope of production. As a result, the bulk of incremental Chinese oil demand comes from them.

China has also since 2016 started to re-export from those increasingly efficient refineries, which are often supported by soft government loans or at least, loose taxation. This new competition is putting increasing pressure on overseas refineries, in turn reducing the latter’s demand for crude.

Beyond consolidating China’s crude demand, the teapots helped soak up excess supply from the global oil markets. However, they also contributed to a glut of refined products, in particular diesel, the less demanded fraction of teapots’ refining runs.

In turn, this put considerable pressure on middle distillate markets across Asia.

In the summer of 2016, crude imports temporarily lost their momentum when the government threatened to enforce tax compliance among independent refiners, with fears that import licences granted by the Chinese government might have dropped in response.

Nevertheless, teapots are here to stay and will benefit not only from local support, but also from the government’s continued backing, not least because they are a hassle free solution to China’s oil industry corruption problem. They have been instrumental to President Xi Jinping’s crackdown on graft among the ranks of Chinese NOCs leadership.

Competition from teapots is a good way to keep enforcing discipline on those state-owned companies. Besides, local government will also want to support and retain them, since many of those refineries account for 70-80% of some cities’ tax revenue.

Shandong Dongming Petrochemical Group, the biggest among China’s private refineries, recently pointed out that heavy crude from Saudi Arabia and Iran was too sour to be processed at its plants.

Crude with a lot of sulphur requires more refining steps, and therefore more infrastructure that investment-craving teapots currently have.

So far, China has registered a 14–16% growth of oil imports against a single-digit – if not relatively flat – consumption growth. While such a pace was clearly unsustainable, the refill of the SPR had hitherto buffered this trade/consumption imbalance.

China became a net exporter of refined products such as gasoline and diesel in June 2014, following several brief brushes as a net exporter in December 2009, January 2010 and in 2014.

The expansion of domestic refining capacity reinforced the trend towards less imports and more exports of refined products.

In the meantime, the country’s ravenous demand for oil has somewhat faded into less energy-intensive manufacturing and more stringent pollution control.

As China’s industrial growth shifts back to consumer-driven demand, the leap in refined products demand that characterised the past decade may not be seen again. Therefore, refined products exports will be a way of adding value to the economy.

However, China has continued to add up additional refining capacity. The resulting glut of refined products has hurt refineries’ profit margins but also led to a surge of gasoline and diesel exports in Asia.

In fact, analysts seem to concur on the fact that one of the main drivers of the surge in crude imports is a re-export trade of refined products. Markets in Asia are generally not as short in diesel as they used to be in the past. Chinese refining capacity has therefore reached a point where it exceeds domestic demand, even if the global demand for refined products continues to grow.

For China to be able to export those products, the spread between Chinese prices and Singapore prices has to be wide enough. China may nonetheless have a growing role in satisfying demand for motor fuels in countries where refinery outages or the lack of capacity has been an issue, especially in countries where China buys oil including Angola or Nigeria.

As they grow in sophistication, Chinese refiners will also play in important role in meeting rising Asian demand for cleaner fuels, and refined products exports will thus continue to grow, even with increased competition from large exporters in the Middle East, Europe and India.
Source: ICIS (By Julien Mathonniere; https://www.icis.com/resources/news/2017/12/13/10173856/insight-china-takes-a-driving-seat-in-global-oil-markets/)