China’s banks turned on the lending spigot again last month — a boost for the near-term economic outlook, but a longer-term drag as the nation’s debt pile keeps on swelling.

New yuan loans rebounded to 985.5 billion yuan ($150 billion) in May, the People’s Bank of China said, ahead of all 35 economists estimates and beating the median for 750 billion yuan in a Bloomberg survey. Aggregate financing was 659.9 billion yuan last month, missing all but one of 28 forecasts and below the median for 1 trillion yuan, as short-term bill financing slumped and net issuance of corporate bonds turned negative.

The two-speed data illustrate the tightrope being walked by the central bank: on the one hand it’s seeking to curb financial and debt risks, while on the other it needs to keep credit flowing so that economic growth isn’t derailed. Mortgages led the bank lending increase last month amid a recovering property market.

“The jump in new yuan loans shows the PBOC’s determination to support growth, and the shrinking shadow financing, seen in aggregate financing data, shows its awareness of the risks,” said Zhu Qibing, a Beijing-based analyst at China Minzu Securities Co. “The PBOC has too many targets, so it inevitably swings back and forth in policies.”

The International Monetary Fund this week said China’s near-term economic outlook is being buoyed by policy support even as its medium-term prospects become more uncertain because of rapidly rising credit, excess industrial capacity and financial sector risks. China’s debt load has swelled to about two and a half times gross domestic product, according to Bloomberg Intelligence estimates. 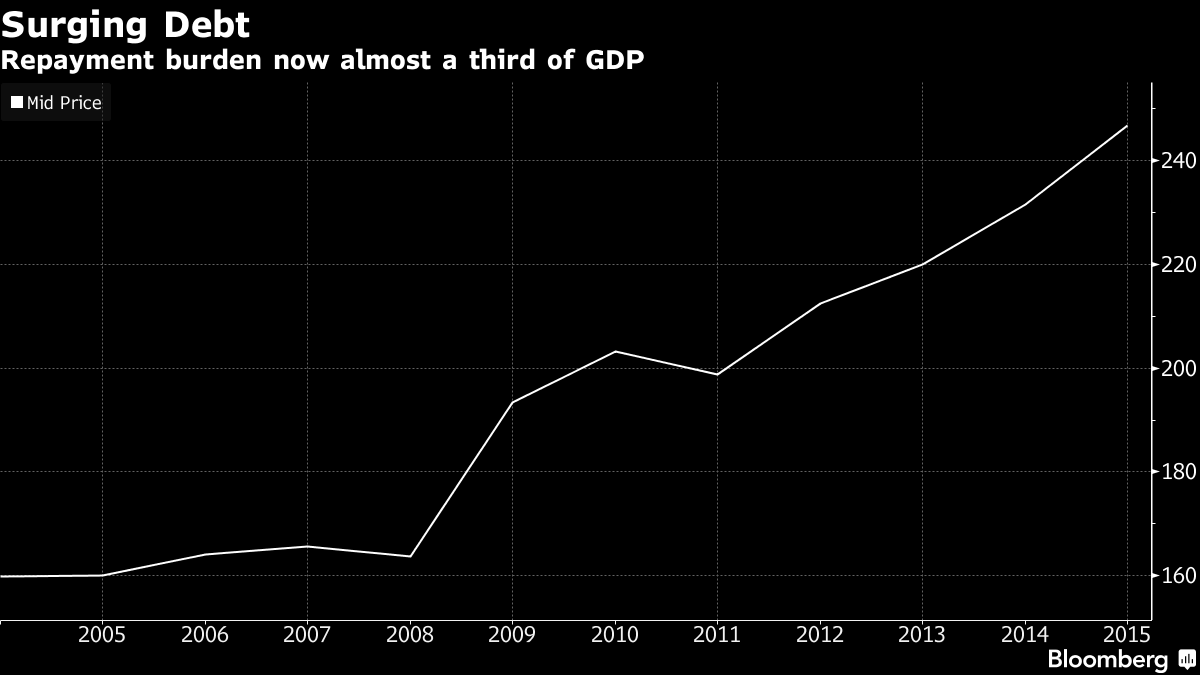 M2 money supply increased 11.8 percent, down from 12.8 percent a month earlier. The government is aiming for 13 percent M2 growth this year.

There was initially some confusion around the new yuan loans figure after the PBOC originally reported that bank lending had climbed by just 10 billion yuan in the month. It later amended the figure on its website.

Aggregate financing was dragged by a 506.6 billion yuan slump in undiscounted bankers acceptance bills — a short-term debt instrument issued by a firm that’s part of a commercial transaction and that’s guaranteed by a commercial bank. The central bank has been expanding efforts to monitor and control risks emerging in the burgeoning market for loosely-regulated shadow lending. 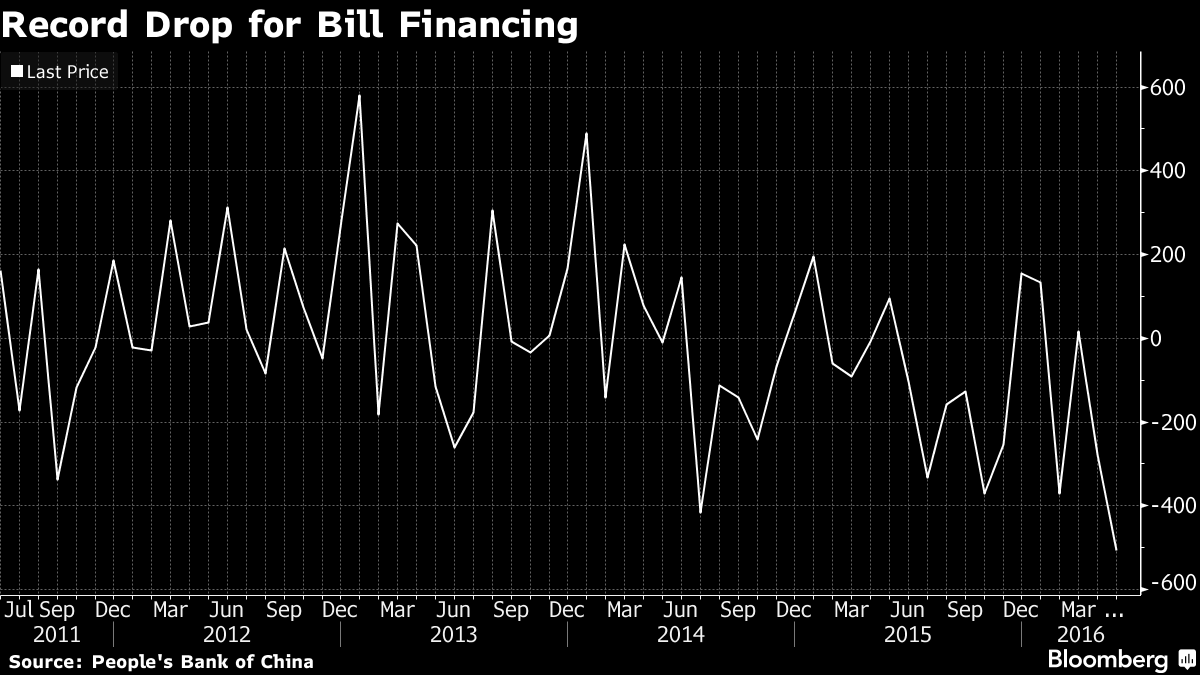 “China: Banks 1, shadow banks 0,” is the scorecard from Tim Condon, head of Asian research at ING Groep NV in Singapore. “The authorities have cracked down” on bankers acceptances in response to a series of scandals.

The combination of stronger-than-expected bank lending and weaker aggregate financing suggests there was a substantial reduction in alternative financing activities, said Raymond Yeung, a senior economist with Australia & New Zealand Banking Group Ltd. in Hong Kong.
“The higher-than-expected loans for May will reinforce our view that the PBOC will prefer not to stimulate massive loan growth,” he said. “The monetary policy stance will still be moderately accommodative.”

Reflecting a recovering property market, new long-term loans to households rose to a record 528.1 billion yuan in May. 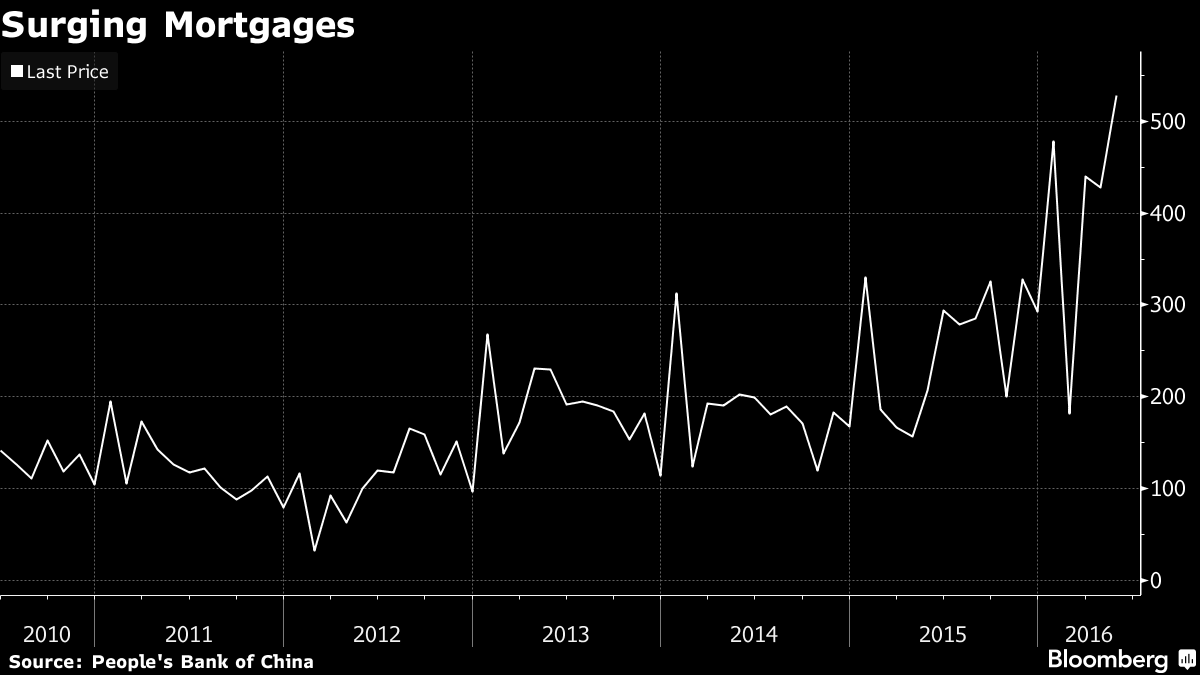 “No sign at all of credit being reined in,” said Michael Every, head of financial markets research at Rabobank Group in Hong Kong. “Naturally it’s very short-term positive, much more worrying longer term.”
Source: Bloomberg