The standout feature of China’s crude oil and product trade data for December was the surge in exports of refined fuels to a record, but it already appears that this dynamic may not be sustainable.

China shipped out 6.17 million tonnes of refined products in December, equivalent to about 1.6 million barrels per day (bpd), using the BP conversion factor of 8 barrels of product per tonne.

The strength in December’s exports of products, which include gasoline, diesel and jet fuel, was most likely a reflection of strong crude imports in November, when 9.01 million bpd were brought in, the second highest on record. 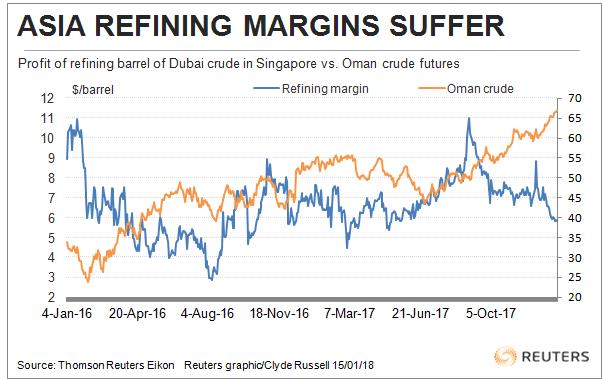 The glut of crude available to Chinese refiners in November and December was also coupled with still strong margins for products across Asia.

The profit for processing a barrel of Dubai crude at a refinery in Singapore averaged $7.17 in December, according to Reuters data.

This meant that Chinese refiners were able to take advantage of strong prices for products in December, while processing crude oil that was most likely bought in October, when the price of Middle East benchmark Oman crude was still around $55 a barrel.

But this dynamic has shifted fairly dramatically in recent weeks, with crude prices surging and refining margins dropping.

Oman crude futures ended at $67.10 a barrel on Jan. 12, the highest in just over three years, while the refinery margin DUB-SIN-REF dropped to $5.85 a barrel, close to the lowest since May last year.

Crude prices and refinery margins have an inverse relationship, with the profit from producing fuels tending to peak in the weeks after crude prices reach lows.

For example, when the refinery profits reached their 2017 peak of $11.01 a barrel on Sept. 1, it was about six weeks after Oman futures recorded their closing low for the year of $43.47 on June 21.

The sharp jump in crude benchmarks in recent weeks may well be a reflection of the market view that the Organization of the Petroleum Exporting Countries (OPEC) and its allies in the deal to cut output are successfully tightening the market.

But higher crude prices undermine the profitability of their refinery customers, thus making it more likely that output will decline, at least to the point where inventories of refined fuels are low enough to cause their prices to rise, thus restoring margins.

For Chinese refiners, the trick is to work out whether it’s still worth importing crude for processing into fuels for exports.

In some ways the current market dynamic in Asia is an exercise in working out which of the refiners who export product have the most efficient plants, and can therefore withstand lower product margins.

While the major, state-owned refiners in China operate new generation units, it’s likely that the smaller, independent refiners may struggle to compete on level terms with their larger domestic counterparts, and also efficient large-scale export refineries in other parts of Asia, such as those in Singapore or India’s west coast.

Given that smaller refiners were behind much of the gain in China’s crude imports in 2017, any sign that they may pull back on purchases would be bearish for crude imports.

Independent refiners, sometimes referred to as teapots, imported about 70.5 million tonnes of crude in 2017, up from 42.1 million in 2016, according to data compiled by Thomson Reuters Oil Research and Forecasts.

This means that the independent refiners imported about 568,000 bpd more last year than they did in 2016, accounting for much of China’s overall increase in crude imports of about 800,000 bpd.

In some ways China’s independent refiners have become the single most important driver of overall global crude demand growth, meaning their health becomes of increasing importance.

The current expectation is that these refiners will continue to import more crude, given the authorities in Beijing appear to be enabling this by granting them quotas to buy foreign oil directly.

But ultimately, what will determine if this turns out to be the case is whether China’s independent refiners can compete domestically and regionally with the bigger players.
Source: Reuters (Editing by Richard Pullin)

Previous WeedMD Appoints Kevin McGovern to Its Board of Directors
Next STATS ChipPAC&rsquo;s Patent Portfolio Recognised for the Eighth Consecutive Year by IEEE