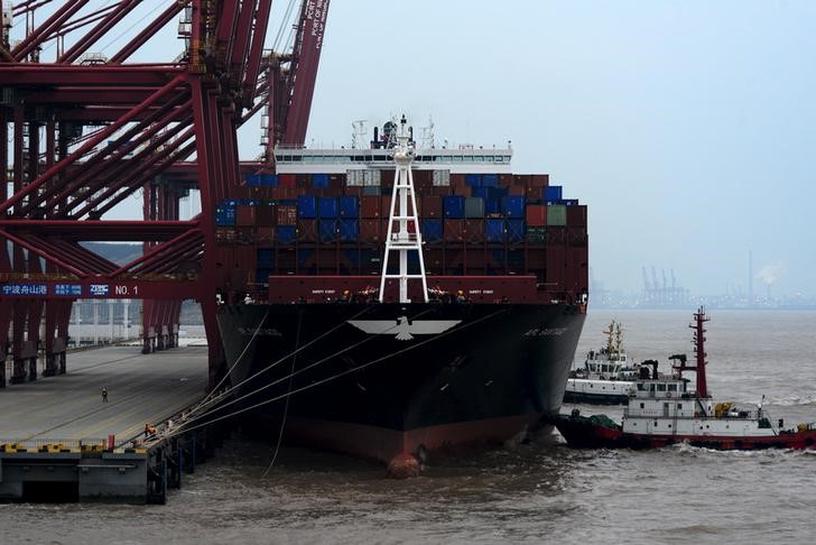 A cargo ship is anchored at a port in Zhoushan, Zhejiang province, February 14, 2016.

BEIJING China’s exports in March returned to growth for the first time in nine months, adding to further signs of stabilisation in the world’s second-largest economy that cheered regional investors.

March exports rose a blistering 11.5 pct from a year earlier, customs data showed on Wednesday, the first increase since June and the largest percentage rise since February 2015.

Economists warned that the data was heavily influenced by base effects and seasonal distortions from the Lunar New Year, and was not necessarily evidence of stronger global demand. Chinese investors celebrated, nevertheless, with key stock indexes hitting three-month highs and the yuan firming.

“China’s foreign trade sector will likely improve from last year due to low comparables, but the improvement will not be dramatic, as the trends in external markets are not great,” said Wang Tie Shi, economist with Industrial Securities.

“We’ve started to see improvement in PMI and other indicators, which points to some degree of recovery going into the second quarter.”

The upside surprise comes after other March economic indicators hinted of slight improvements in the broader economy, although other surveys have shown rising downward pressure on wages and employment.

Imports continued to fall but less than expected, declining by 7.6 percent in dollar denominated terms, led by sharp corrections in imports of tax-free foreign goods, rentals and leasing and imported equipment.

However, import volumes of most major commodities, notably copper and iron ore, rose strongly. That left the country with a trade surplus of $29.86 billion for the month, data from the General Administration of Customs showed, versus a forecast of $30.85 billion.

“I think we should focus on the better-than-expected imports growth rate, which means domestic demand is also recovering, driven by infrastructure investment and also the real estate sector recovery,” said Ma Xiaoping, analyst at HSBC.

China’s slowdown might not be quite as severe as first feared but its “momentous” shift from investment-led growth is still having a chilling effect on trade globally, the International Monetary Fund said on Tuesday.

“Even countries that have few direct trade linkages with China are being affected through the Chinese slowdown’s impact on prices of commodities and manufactured goods, and on global confidence and risk sentiment,” the Fund said.

“As we close out Q2 and enter Q3, we’ll see more stable trade data before starting to see sustainable, small rises in both sides,” Nash said, adding data should be much less volatile in the second half as currencies and commodities stabilise.

NOT OUT OF WOODS YET

Economists polled by Reuters had expected March exports to rise 2.5 percent, after tumbling 25.4 percent in February – the worst showing since May 2009, and expected imports to fall 10.2 percent, based on weakness in global demand.

“Data across other Asian economies suggest that the headwinds in the trade sector remain,” Zhou Hao, economist at Commerzbank in Singapore, said in a research note.

“Given the gloomy economic outlook, we believe that the overall Asian trade growth will have limited upside this year.”

Still, markets were relieved to see a surge in China’s demand for commodities such as copper, with imports hitting a record monthly high, while its exports to key markets such as the United States and Europe also posted double digit month-on-month gains.

Key economic data, including first-quarter economic growth, are expected this week. The government aims for economic growth of 6.5 to 7 percent this year. The economy grew 6.9 percent in 2015, the weakest pace in a quarter of a century.

(Additional reporting by Jessica Macy Yu and by Elias Glenn in SHANGHAI; Writing by Pete Sweeney; Editing by Lincoln Feast and Jacqueline Wong)

Previous Fixing the finances of 1MDB: the process so far
Next Gisborne meth bust highlights worrying trend in NZ – expert