Chinese scientists have made a breakthrough in understanding deepwater sound communication after conducting China’s first acoustic test in the Mariana Trench, the deepest part of the world’s oceans.

Researchers from Northwestern Polytechnical University in Shaanxi province carried out the experiment near the Challenger Deep, a small valley at the southern end of the trench about 11km under the surface, China Ocean News reported this week.

The test involved sending out and retrieving a 10km acoustic probe that had sensors which could pick up sounds at a distance of 9.3km.

“Chinese scientists have, for the first time ever, heard sound from the deepest part of ocean,” the report said.

It was just the second time an acoustic experiment has been conducted in the trench, Lu Liangang, a deputy researcher from the First Institute of Oceanography, which was also involved in the unmanned mission, told the newspaper. 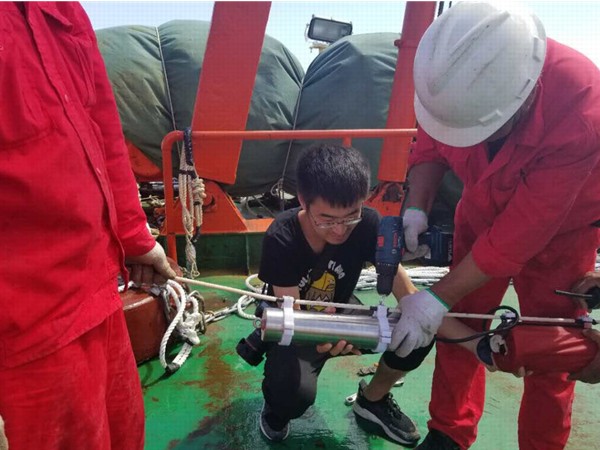 The Challenger Deep, which lies about 320km southwest of the US territory of Guam, is the deepest point recorded in the earth’s seabed. Few teams have descended there since a US submersible made the first trip in 1960. The most recent manned descent was by Canadian film director James Cameron, who reached the bottom with submersible vessel Deepsea Challenger in 2012.

The purpose of China’s acoustic experiment, which took about a year to prepare, was to understand how sound is transmitted in the deep sea. Since there is no light down there, many creatures rely on sound for communication.

Underwater station could be a game changer, Chinese scientist says

The marine acoustic research could have military applications, according to Collin Koh Swee Lean, a research fellow with the Maritime Security Programme at the S. Rajaratnam School of International Studies, Nanyang Technological University in Singapore.

Chinese scientists also left six acoustic sensors in the trench which will gather information about sea ambient noise for one year until they are retrieved in November 2018, according to the report.

Researchers from the Ocean University of China in Qingdao and the Institute of Acoustics at the Chinese Academy of Sciences also took part in the acoustic test.

China has made many previous missions, both manned and unmanned, to the deepest point of the trench, which is about 2,400km long and about 70km wide. Its manned submersible Jiaolong – which can take three crew members beyond 7,000 metres – has completed 20 dives into the trench in three different expeditions.

In 2016, China became the third country, after the United States and Japan, with an unmanned submersible that can go more than 10,000 metres deep – China’s Haidou can dive down to 11,000 metres.

Other research devices include the home-grown Tianya deep-sea lander that can dive to 7,000 metres, make optical observations and collect samples, and the Yuanwei Shiyan deep-sea elevator which is used to conduct on-site experiments.

Beijing listed deep-sea scientific exploration as one of the key projects in its five-year plan to 2020.

Previous Caroline Wozniacki targets New Zealand crown ahead of Australian Open
Next 2017: Most beauteous year for the Philippines