CMA-CGM: Has the NOL Acquisition Come at a Heavy Price?

“In 2016, most probably, none of the 20 top companies will be profitable, consolidation will continue because small shipping lines will not be able to survive; the small to medium operators will be looking for a big brother to acquire them,” said Vice Chairman for CMA-CGM, Rodolphe Saadé.

Indeed, CMA-CGM has followed suit this year and reported a financial loss of over $260 million for third quarter with average revenue per TEU down 13.9% excluding NOL’s contribution. Plus, it made its largest acquisition to date by acquiring Neptune Orient Lines (NOL) and also signed up as a member of the Ocean Alliance. Has it bitten off more than it can chew? 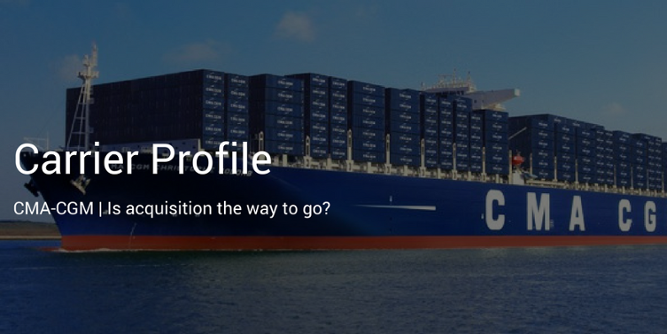 2016 has proven to be a busy year for the French carrier as it works to integrate NOL and trim costs. As part of the acquisition, CMA-CGM agreed to move about one-third of its traffic from the Klang port in Malaysia to Singapore and has also moved its regional headquarters from Hong Kong to Singapore.

In addition, CMA-CGM and PSA Singapore Terminals have formed a joint venture to operate and use four container berths at Pasir Panjang Terminal Phases 3 and 4. Estimated handling capacity of 3 million TEUs annually, the facilities will be used as dedicated container terminal for the group and its shipping affiliates in the region.

There were rumors abound that CMA-CGM could have been a potential buyer for Germany’s Hamburg Süd. Now, that it is confirmed that Maersk Line will be the proud owner of Hamburg Süd, that could actually be a blessing for CMA as it is working hard to make the NOL acquisition a smooth and positive one.

Since the finalization of the NOL acquisition in June, CMA-CGM’s focus has been to turn the loss-making NOL around with plans to sell US $1 billion in assets to strengthen the balance sheet. As such, CMA CGM announced it would sell its APL container terminals. As of the first of November, first-round bids remain outstanding. Furthermore, details of the terminals for sale have not officially been released either. But, APL owns terminals in Los Angeles, CA; Dutch Harbor, AK; Kobe, Japan; Yokohama, Japan; and Kaohsiung, Taiwan. Even though the sale of APL’s terminals is officially a strategic move to reduce debt, it is also reflects the company’s involvement in the newly established Ocean Alliance, which means the shipping line will be able to reduce route redundancies and therefore diminish the need for owning as many terminals.

Another cost-cutting measure is its outsourcing some of its global feeder operations. As of September 16, CMA-CGM cut its fleet of ships between 600 to 1,750 TEUs from 171 to 133 units in the past 6 weeks as it shifts certain feeder services to third parties. According to JOC, beneficiaries include specialist feeder lines such as X-Press Feeders, Unifeeder and Unimed Feeder Services which are chartering ships to handle the French carrier’s cargo.

CMA-CGM is considered the main contributor to this alliance. It will have the largest share within the alliance, deploying a fleet of 119 vessels with a 35% capacity share. Have received approval from US regulators, the members announced their proposed network in November. Together, the partners will operate 40 services on the East-West trades, with around 100 ports of call and almost 500 port pairs. The Alliance will be supported by nearly 350 vessels with about 3.5 million TEUs in total capacity.

Mr. Saadé seems to have written off 2016 in the opening of this article as he looks forward to improving market conditions in 2017. Rates do appear to be trending upward as capacity continues to be removed. As such, many carriers are cautiously optimistic for the New Year and in particular have set high expectations for the launch of the Alliances in Spring 2017.

For out more on our Xeneta blog notifications and be sure to sign up for the newsletter to stay in the know of the ever-changing ocean freight market.
Source: Xeneta (https://www.xeneta.com/blog/has-cma-cgm-nol-acquisition-come-at-heavy-price?utm_source=Outreach&utm_campaign=CMA-CGM%3A%20Has%20the%20NOL%20Acquisition%20Come%20at%20a%20Heavy%20Price%3F)