NEW DELHI | MUMBAI: Business education — much like business itself — appears to have become a family pursuit for an increasing number of young Indian couples.

A private equity professional became an eleventh-hour MBA applicant last year, desperately reaching out to Mumbai-based consultant Vibha Kagzi, when the Round 2 (R2, in MBA parlance) application season had begun in the US. Her fiancé was trying his luck at Ivy League B-schools for an MBA and she faced a tough choice — spend two years in a long-distance relationship, or sacrifice the swish job in Mumbai and head to the States for her own MBA.

The consultant put her through a gruelling training schedule ahead of the R2 deadlines. Although both schools are located on the eastern water margin in the US, the couple had to settle for MBA ‘admits’ in two different schools.

Another couple — both 26 and IITalumni — decided to pursue its US MBA dreams together while working at Hindustan Unilever last year. Both came to Rajdeep Chimni of Admissions Gateway a year. 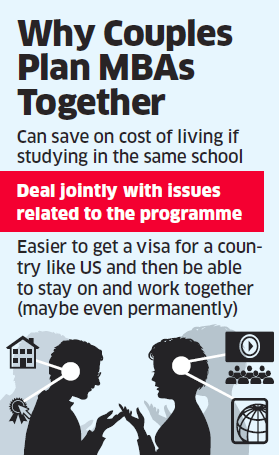 NUMBERS GOING UP
Amit Sharma (not his real name), 30, is waiting to hear back from INSEAD on his wife’s application for a seat at the graduate business school with campuses at France’s Fontainebleau, Singapore and Abu Dhabi. Sharma is already at the school that offers one of the world’s most competitive one-year MBA programs, and his wife is evaluating his experience and opportunity costs before deciding to apply for a seat at the top school soon after her husband graduates.

Arun Jagannathan, co-founder of Bengaluru-based CrackVerbal consultancy, said his company deals with at least five such couples a year. “The numbers have gone up. Student visas are much easier to get than work visas. It is easier to get through a good school than to wangle a work permit,” he said. It is also easy to prepare for and do the entire MBA journey together. “People come in the same year, but we also see an increase in referrals — of one partner recommending the other in the next year,” said Chimni.

Rajiv Ganjoo, president of Leverage Edtech, said he has seen several newly-married couples who want to join a B-school together. Recently, a couple came to him, exploring the option of applying to B-schools together. “But cost is a deterrent sometimes. There are instances when one of them drops out because of the cost,” he said.

This strategy is most popular among working couples who are in steady jobs as the opportunity cost of two MBAs is very high. “Both partners understand and value the MBA degree enough to want to get into a long-distance marriage, and give their careers the needed boost,” said Kagzi of ReachIvy. Consultants said if just one of the two wants to study in a country like the US, it’s difficult for the spouse to find employment. Most couples want to study together because they don’t want a separation.

New Delhi-based consultant Mansie Dewan said that couples targeting international schools together look for global careers. “The MBA has practically become a pre-requisite to move ahead in senior-level management roles. So, for couples with similar experience, it is often a prudent choice. Some do it one after the other, so that one can fund the other’s education,” she said.

Consultants said sometimes the draw-card is an easier US work-visa for alumni of US schools. The newly-weds are not the only sets of couples reading the basics of grammar for the GMAT, the standardised MBA test: Many of those applying have been married for anywhere between four and ten years, said Jatin Bhandari, CEO of PythaGurus. “In the past one year, Ihave seen at least six couples who have opted to study abroad, with a lag of just one year between them.”

That way, one gets to earn and the other to study. And the next one starts out on his/her MBA journey when the spouse is back at work again, like one of Bhandari’s recent clients. Nupur Gupta, who heads Crack-TheMBA, helped one such couple last year: Couples choose programs together because they can save on livings costs, while getting a graduate degree together.