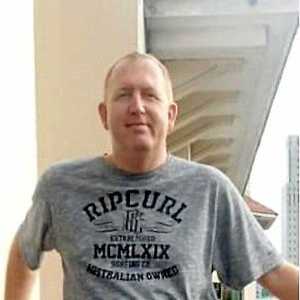 IMPRISONED in the Philippines for three years without a trial, former Boyne Island man Troy Birthisel at least now knows when his next day in court might be.

He still, however, feels helpless ahead of his next hearing on February 6 next year after “about 20” of his hearings have been postponed.

Mr Birthisel, a father of three, is being held in Lapu Lapu City Prison in Cebu, Philippines.

Mr Birthisel was originally charged with human trafficking after being detained at the Cebu airport in the Philippines in October 22, 2013. He was with seven Filipino women, bound for a plane to Singapore, with one of those women his girlfriend, Lovely Jane Modina.

He said one of the officers that arrested him had tried to extort money from him at the airport and that six of the females travelling with him had been intimidated and “coerced” into making damning allegations against him. Mr Birthisel said the six other women were never arrested and had since given sworn affidavits that support his innocence.

Speaking to The Observer from his overcrowded Philippine jail this week, the 47-year-old said he kept expectations of his upcoming hearing low, to stop being hurt mentally.

Now facing charges of illegal recruitment involving sabotage, Mr Birthisel is begging the Australian Government to act and push for a “speedy trial”.

“I try not to have too many feelings any more about progress,” Mr Birthisel said.

“It’s very disappointing when you get there and it’s postponed. Physically I’ve lost a lot of weight, about 20 kilograms … mentally I’ve been through some really dark times.

“Three years and I haven’t advanced anywhere … I feel like I could be here for another 30 years.”

The former Benaraby State Primary and Toolooa State High school student, who played senior football for the Boyne Island Tannum Sands Saints as an adult, spoke quietly from the jail as yelling rung out in the background.

Mr Birthisel, who has worked as a mines safety officer throughout Australia, PNG and in Asia, said as time goes on he felt less confident about his future and the prospect of his release.

Mr Birthisel claims his girlfriend and her friends were travelling to Singapore for a job interview, and he was travelling with them to ensure their safety.

Ms Modina, who has been locked up since October 2013, is also accused of conspiring to commit the same crime.

The Department of Foreign Affairs and Trade has been providing consular assistance to a man in the Philippines since December 2013.