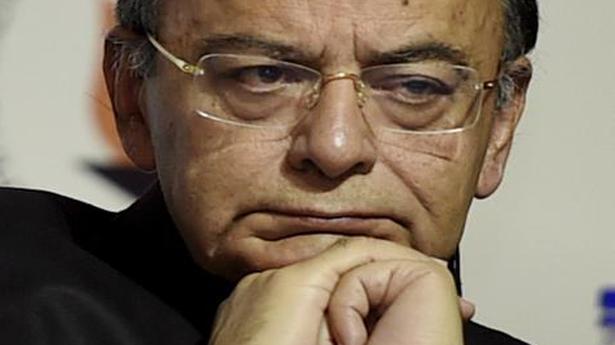 Listing out the benefits of demonetisation, Union Finance Minister Arun Jaitley on September 29 said that direct tax collections had risen 15.7% till September 18, adding that undisclosed income of ₹5,400 crore was also detected.

“Net collections up to September 18 in the current financial year rose to ₹3.7 lakh crore, a growth of 15.7%. The revenue collections in case of direct taxes rose to ₹8,49,818 crore during 2016-17, a growth of 14.5%,” he said while highlighting the impact of November 8, 2016 demonetisation and the proactive initiatives of the Income-Tax Department.

Mr. Jaitley was addressing the Consultative Committee of the Finance Ministry ‘Initiatives of the Income Tax Department’ in New Delhi. The Minister said the number of taxpayers increased significantly from 4.72 crore in 2012-13 to 6.26 crore during 2016-17.

“As far as the drive against black money is concerned, the department has taken various initiatives since this government came to power. After the intense follow-up of demonetisation data from November 9, 2016, to January 10, 2017, about 1,100 searches were made, resulting in the seizure of ₹610 crore, including ₹513 crore in cash. Undisclosed income of ₹5,400 crore was detected and about 400 cases referred to the Enforcement Directorate and the Central Bureau of Investigation (CBI) for appropriate action,” he said.

In this regard, the Minister mentioned the enactment of the Black Money Act, 2015, comprehensive amendments to the Benami Act of 1988 and ‘Operation Clean Money’. Mr. Jaitley said the department has taken various initiatives in the last 2-3 years to bring about efficiency, transparency, and fairness in tax administration.

The Minister said a Single Page ITR-1 (SAHAJ) Form was introduced for taxpayers with annual income up to ₹50 lakh. “The rate of tax for individuals with income of ₹2.5 lakh to ₹5 lakh was reduced from 10 % to 5 %, one of the lowest in the world,” he added.

Mr. Jaitley said the concept of ‘no scrutiny’ was introduced for the first time non-business taxpayers with incomes of up to ₹5 lakh so that more and more people were encouraged to come under the tax net and file their I-T returns. He said corporate tax was reduced to 25 % for companies with turnover of up to ₹50 crore, thereby covering almost 96 % of the companies.

The new manufacturing companies incorporated on or after March 1, 2016, were given an option to be taxed at 25% without deduction. The Minimum Alternate Tax (MAT) credit was allowed to be carried forward up to 15 years, instead of 10 years, as part of procedural reforms.

In the field of e-governance, the Finance Minister said that 97% of the income tax returns were filed electronically this year, of which 92% were processed within 60 days and 90% refunds issued within 60 days.

“Grievance redressal system — e-nivaran — was introduced, which integrates all online and paper grievances and tracks them till their resolution. Every grievance is acknowledged and resolution intimated through emails and SMSes. Eighty four per cent of 4.65 lakh e-nivaran grievances have been resolved so far,” he said.

Mr. Jaitley said that the e-governance initiatives of the Income-Tax Department have helped in having minimum direct interface between tax assessing authorities and assesses, which in turn helped in minimising harassment, curbing corruption, and saving time.

He highlighted other department initiatives as far as ease of doing business and promoting financial markets were concerned. He specifically mentioned the introduction of presumptive taxation scheme for professionals with incomes of up to ₹50 lakh.

The Minister said India had entered into collaboration with 148 countries on exchange of information on tax matters and with 39 countries on criminal matters. He said changes in the Double Taxation Avoidance Agreements with Mauritius and Singapore have been incorporated to allow for source-based taxation of capital gains on shares and interest income of banks.

In order to promote less-cash economy and digital transactions, the Minister said, various initiatives were taken, including penalty for cash receipt of ₹2 lakh or more, reducing limit for cash donation to charitable trusts from ₹10,000 to ₹2,000 and to ₹2,000 to political parties.

The Consultative Committee members gave suggestions to improve both revenue collections and overall performance of the department.