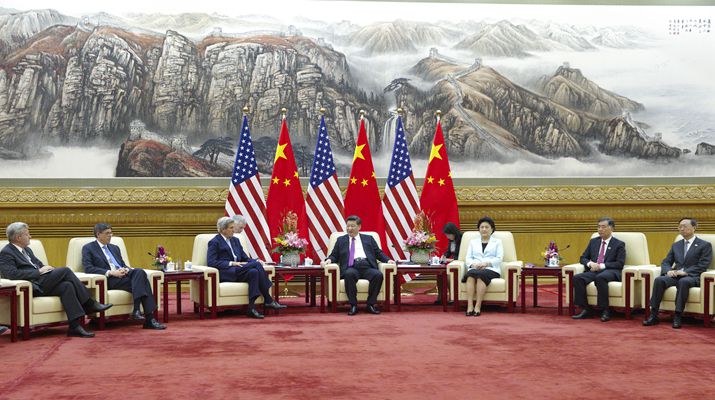 The annual China-U.S. Strategic and Economic Dialogue (S&ED) and the China-U.S. High-Level Consultation on People-to-People Exchange (CPE) ended in Beijing on June 7.

In the strategic track of the S&ED, the two sides exchanged views on a number of important agenda issues, including building a new type of major-country relations between China and the United States, deepening bilateral

cooperation, managing disputes, as well as other regional and global challenges, with as many as 120 results achieved.

The dialogue’s economic track was also fruitful. The governments of China and the United States agreed to exchange revised and improved negative list offers in the new round of the China-U.S. Bilateral Investment Treaty (BIT) negotiations in mid-June and to strive for a BIT featuring mutual benefit and win-win results at an early date. Both sides also agreed on a policy framework for the private sector to further develop renminbi trading and clearing in the United States. China will provide the United States with a quota of 250 billion yuan ($37.97 billion) under its Renminbi Qualified Foreign Institutional Investor (RQFII) program. The RQFII mechanism, which was launched in December 2011 and allows qualified overseas renminbi funds to invest in China’s securities markets within permitted quotas, aims to partly increase the international use of the Chinese currency.

As a core agenda item of this year’s S&ED, the two sides agreed to work closely together and with all parties for more positive results at the G20 Summit to be held in Hangzhou in September and ensure the success of the meeting.

However, this S&ED round seemed relatively unimpressive on some key issues.

In the last three years, China-U.S. relations have been affected by growing tensions in the South China Sea and prominent differences between the two countries in some other areas. Mutual suspicion between the two sides has increased, which has cast a shadow on the future development of bilateral relations.

President Barack Obama and his administration’s recent policy toward China seems dominated by the excessive concern that China will challenge the U.S.-led world order. There is a high risk of confrontation in the South China Sea between the two nations triggered by strategic miscalculations. Worse still, human rights issues and the question of Taiwan have also added to the uncertainties in China-U.S. relations.

For example, during the recent Asian Security Summit, also known as the Shangri-La Dialogue, held in Singapore on June 4, U.S. Secretary of Defense Ashton Carter again blamed China for the tensions in the South China Sea while proposing the establishment of a regional security structure. Carter’s proposal is meant to strengthen the United States’ military alliance in the Asia-Pacific region against China.

It is not surprising that the two sides have not significantly narrowed their divide on the South China Sea issue. Chinese President Xi Jinping’s special representative, State Councilor Yang Jiechi, expressed China’s stance on the issue in his remarks during the S&ED’s closing session.

Yang reiterated China’s consistent position, pointing out that the South China Sea Islands have been China’s territory since ancient times, and that China has every right to safeguard its territorial sovereignty and legitimate and lawful maritime rights and interests. “Based on international law, including the UN Convention on the Law of the Sea, China does not accept or participate in the arbitration case initiated by the Philippines. This position remains unchanged and will not change,” he said.

“China hopes that the United States will keep its promise of not taking any position on territorial disputes and play a constructive role toward peace and stability in the South China Sea,” Yang said, adding that China has all along respected and upheld the freedom of navigation and overflight enjoyed by other countries according to international law.

Apart from disputes in the field of security, China and the United States also have increasing trade frictions.

On May 10, the U.S. Department of Commerce announced an appeal to the World Trade Organization against China’s anti-dumping and anti-subsidy measures applied to chicken products from the United States. On May 17, the same department announced a hike in import duties of up to 522 percent on cold-rolled flat steel products made in China, which it said were sold in the United States below cost and with unfair subsidies. Chinese trade officials called the massive steel tariffs protectionist measures, saying China needs time to address its overcapacity.

President Xi’s other special representative, Vice Premier Wang Yang, stressed the importance of structural reforms to the sustained economic growth of both China and the United States in his speech during the closing session.

“Excessive production capacity in steel and other industries is a global issue resulting from a weak recovery of the world economy and depressed market demand, thus requiring a collective response,” Wang said.

Moreover, the China-U.S. BIT negotiations, which have passed through 24 rounds over the past eight years, have not proceeded smoothly. Although entrepreneurs from both countries have high expectations for the treaty, it seems unlikely that the talks can be concluded before the end of Obama’s presidency.

Fortunately, both sides are fully aware of the necessity to continue dialogue and manage disputes.

The S&ED serves as an important platform for government representatives of China and the United States to discuss a broad range of issues. Since the mechanism was initiated in 2009, it has become an important feature of the two countries’ bilateral relations. To date, the S&ED has generated over 1,000 results.

Through the dialogue, China and the United States have agreed to promote their relations to a new height, strengthening the stability and consistency of their relations.

China and the United States coordinate their macro-economic policies through the S&ED. The two largest economies in the world have found a way to work together to cope with the fallout from the international financial crisis and other economic problems, and to contribute to global growth, setting an unprecedented example for the international community.

Global issues have become important agenda items in China-U.S. dialogues. Now, the two sides have extended their talks to climate change, food security, public health, fighting transnational crimes and so forth. The cooperation on tackling global challenges has injected new impetus into the development of their relationship.

As a result of the S&ED, Beijing and Washington have also established in recent years a mechanism of communication on sensitive military and security affairs. It has a broad agenda including cyberspace, outer space and the maritime realm. During this year’s S&ED, the two sides agreed to continue efforts to improve mutual trust between their militaries and to explore new information-exchange measures.

This year’s dialogue is the Obama administration’s final S&ED with Beijing. Outcomes achieved through the dialogue will become an important tangible legacy of Obama’s policy toward China.

Is it the end?

Some observers worry whether the S&ED will continue, as the White House will have a new incumbent next year. But such concern is without doubt unnecessary.

Prior to his trip to Beijing for this year’s dialogue, U.S. Secretary of State John Kerry said in an interview that he hoped the S&ED could be carried on, because doing so would be very worthwhile.

President Xi on June 6 attended the joint opening ceremony of the S&ED and the CPE. In his speech, Xi pointed out that the dialogue and consultation have played a significant role in increasing strategic mutual trust, expanding mutually beneficial cooperation and deepening friendship among the peoples of the two nations.

“It is inevitable that disputes exist between China and the United States, yet they could be addressed by redoubling our efforts in a pragmatic and constructive fashion,” Xi said.

On June 7, Chinese Premier Li Keqiang met with Kerry and U.S. Treasury Secretary Jacob Lew who was also in Beijing to attend the S&ED and the CPE.

Li said to the U.S. delegation that China-U.S. cooperation is very extensive, so it is normal for both sides to encounter certain problems during the cooperation. The key is that the two sides should focus on the big picture and properly handle disputes, Li stressed.

Dialogue is not only the core component of the S&ED and CPE mechanisms, it is also vital for ensuring the two countries avoid becoming trapped in a zero-sum game.

No matter who becomes the next U.S. president, he or she is highly unlikely to close the door to dialogue with China and may even attach even more importance to the bilateral relationship.