Tidal changes are emerging in the product tanker trades in the Asia-Pacific region as refineries in China have been steadily increasing their crude oil intake in recent years, aided in part by the granting of import licenses to teapot refiners and the creation of the “China Petroleum Purchase Federation of Independent Refiners”. In its latest weekly report, shipbroker Gibson said that “data for January to August 2016 shows that refinery crude throughput has increased by approximately 600,000 b/d over the same period in 2015 (source: JODI). These developments are not only impacting on the crude tanker market but also changing the dynamics of the Asia-Pacific refined products market”. 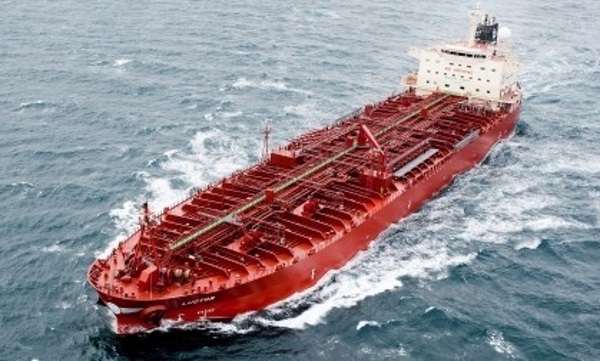 According to Gibson, “traditionally China has been seen as one of the main regional importers of diesel; however, the market has seen a fundamental change with the country recently becoming a net exporter of diesel and increasingly an exporter of gasoline. Chinese internal product demand has changed drastically over recent years as the economy has attempted to gradually shift away from heavy manufacturing and laboring to commercial services, resulting in softer diesel demand used mainly in heavy industries, whilst demand for gasoline and jet fuel has remained strong. Reforms to the refining sector allowing independent teapot refineries to compete against larger state-owed refineries has increased competition to sell internally and has resulted in refineries looking abroad to place barrels”.

The shipbroker said that “it is important to note that in general most Chinese refineries are geared up to maximize diesel production. In order to meet internal demand for gasoline and jet fuel, diesel production will naturally increase, resulting in a surplus supply and more barrels for export. However, with more refineries running at high levels, supply of all products will improve, with increasing export volumes. When looking at the export figures so far this year, the impact of changes to China’s product demand paints an interesting picture. Diesel exports for Jan-Sept 2016 on average are closer to 180,000 b/d higher than 2015 levels, with gasoline exports also faring well with an increase of roughly 80,000 b/d. September proved to be a record month for exports of diesel. Most intriguingly, however, diesel and gasoline imports have increased throughout 2016 despite the large export volumes”, said Gibson. 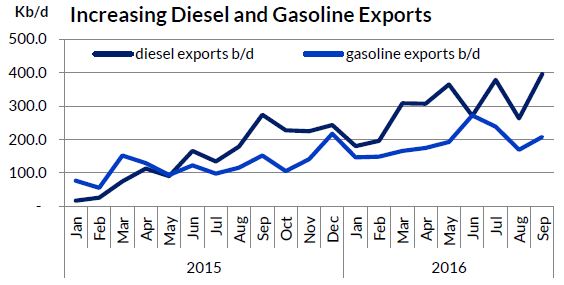 What has this meant for shipping? Gibson says that “sadly the increase in Chinese exports has not resulted in any significant upturn in rates. With the majority of barrels being sold to traders, it would appear most have been heading south into Singapore, with further exports required to really push freight rates higher. What has emerged though is a growing base trade of barrels out of China, which has not just provided an incremental stream of cargoes but also offered owners additional opportunities to achieve higher than 50% utilization during the voyage”, the shipbroker noted.

It concluded by noting that “the Chinese economy is facing significant challenges moving forward, and the refining sector is not immune to these challenges. Along with other major industries such as steel and coal struggling with over-capacity, data suggests that Chinese refining capacity stands at around 14 million b/d, with an estimated 3 million b/d in excess capacity at current intake levels. It would appear that the government is beginning to crack down on any grey areas of taxation in gasoline production and sales, which could hit smaller refiners already hampered by higher logistical costs when exporting. Despite this, slowing industrial output and struggling internal demand will most likely lead to refiners being left with few options but to look further afield to place product. This should result in sustained export demand from Chinese refineries and a steady flow of cargoes for product tanker owners at least in the short term”.

Meanwhile, in the crude tanker market this week, Gibson said that “VLCC Charterers initially concentrated upon the more accommodating older units to successfully drag the market down to ws 50 to the East. Once that had been achieved, sights swung onto more reticent modern vessels that, after token resistance, also moved lower and into the high ws 50’s with runs to the West easing to the ws 35 level. By the week’s end however, a little more interest circulated and Owners dug in to defend the bottom markers with some hopes for increased momentum into next week. Suezmaxes made a slow start, but from midweek became noticeably busier to allow Owners to drive rates up towards ws 75 to the East and close to ws 40 to the West though short hauls to India are likely to be temporarily compromised by the Diwali Holiday. Aframaxes failed to build upon last week’s platform and ended upon the defensive at 80,000 by ws 95 to Singapore with lower levels threatening for next week”, the shipbroker concluded.
Nikos Roussanoglou, Hellenic Shipping News Worldwide