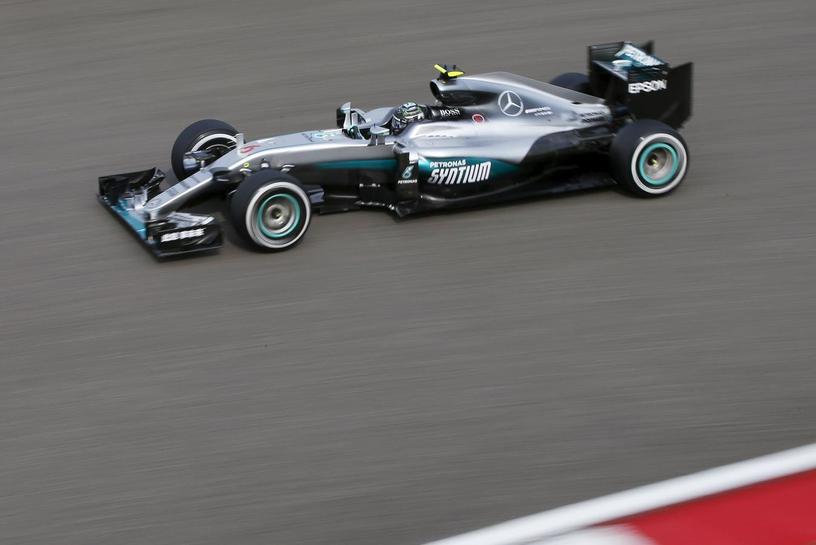 SHANGHAI Nico Rosberg claimed a dominant win in an action-packed Formula One Chinese Grand Prix on Sunday to extend his championship lead over Mercedes team mate Lewis Hamilton, who battled up toseventh with some feisty driving after starting last.

Rosberg crossed the line a mammoth 37.7 seconds ahead of German compatriot Sebastian Vettel, who recovered after colliding with his Ferrari team mate Kimi Raikkonen at the first corner, to claim his third win from three races this season.

The German now leads Hamilton by 36 points in the standings and is firmly in control of the championship with 18 rounds of a record 21-race season remaining.

He certainly has history on his side with the winner of the first three races of the season having gone on to win the title each time.

“It’s three races now and they’ve gone really well for me but it’s the longest season in F1 history with 21 races.

“Of course I’m happy with the way it’s gone and I’m feeling good and the car’s there but I don’t want to say more than that.”

Sunday’s win was the 17th of Rosberg’s career and extended his streak of race victories to six, dating back to last November’s Mexican Grand Prix.

Only three other drivers have ever put together a run of six or more wins in a row. Vettel managed nine with Red Bull in 2013 and Michael Schumacher seven with Ferrari in 2004. The other was Italian Alberto Ascari in the 1950s.

Daniil Kvyat finished third to score Red Bull their first podium finish since September’s Singapore Grand Prix but the Russian had to defend himself after the race when an angry Vettel blamed him for the collision between the Ferraris.

Hamilton, who had started from dead last after failing to set a time in Saturday’s qualifying session due to an engine problem, finished seventh, running into further trouble at the start when he lost his front wing in a first-corner collision.

The Briton used some good-old fashioned racing nous to work his way up to third at one stage. But his challenge faded later in the race as he attempted to battle through with a damaged car that he likened to a “four-poster bed”.

Red Bull’s Daniel Ricciardo finished fourth. The Australian rocketed off the line from second on the grid and shot past Rosberg into an early lead.

But an early puncture and subsequent safety car cost him any chance of a podium place.

“As soon as I got on the straight, basically I could feel the car start to wobble and then I looked in the mirror and the tyre went,” Ricciardo said.

“With the safety car, that put us even further back so that was like a double whammy which felt like getting punched in the stomach by a heavyweight.”

Raikkonen, who came off worse in the first-corner collision with Vettel, was sixth ahead of Felipe Massa of Williams.

Max Verstappen was eighth ahead of Toro Rosso team mate Carlos Sainz while Valtteri Bottas rounded out the top 10 for Williams.

The early safety car led to a chopping and changing of the order with some drivers choosing to pit even as others stayed out. That put a mix of tyre strategies into play, producing a close battle for position behind the leader with plenty of exciting racing through the field.