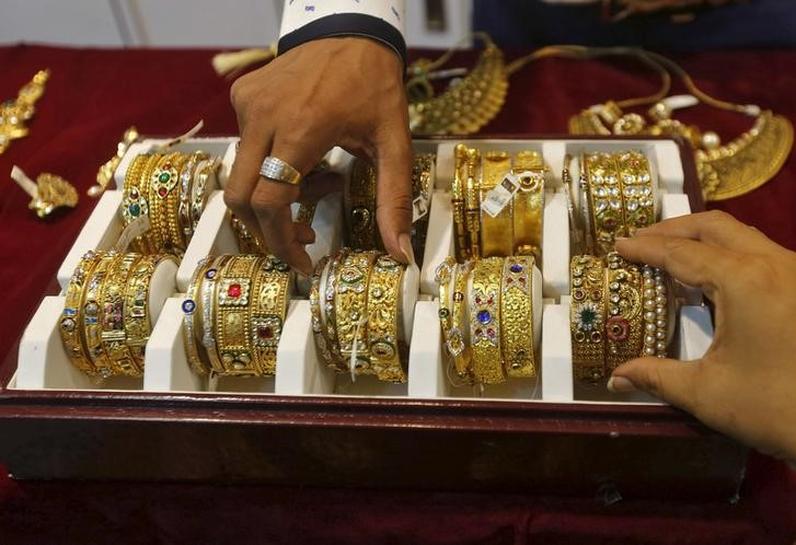 A salesman helps a customer (R) to select gold bangles at a jewelry showroom in Mumbai, India, May 21, 2015.

SINGAPORE Gold held on to sharp overnight gains on Wednesday, buoyed by a softer dollar and Federal Reserve chair Janet Yellen’s remarks that the U.S. central bank should be cautious in raising interest rates.

* Yellen said on Tuesday that the Fed should proceed only cautiously as it looks to raise interest rates, pushing back on a handful of her colleagues who have suggested another move may be just around the corner.

* In her first comments since the Fed decided to hold rates steady two weeks ago, Yellen said inflation has not yet proven durable against the backdrop of looming global risks to the U.S economy, including still-low oil prices and concerns over China.

* The U.S. dollar dropped sharply and stocks on Wall Street ended at 2016 highs after Yellen’s remarks.

* Gold is highly sensitive to U.S. monetary policy, as rising interest rates lift the opportunity cost of holding non-yielding bullion, while boosting the dollar. The metal slid 3 percent last week after hawkish comments from a series of Fed officials.

* San Francisco Fed President John Williams, a close ally of Yellen who is usually among the core of decision-makers, said on Tuesday that the U.S. central bank should stay on track with its tightening plan.

* Holdings are still near their highest in over two years as wider turmoil in the stock markets has burnished gold’s safe-haven appeal.

* For the top stories on metals and other news, click [TOP/MTL] or [GOL]

(Reporting by A. Ananthalakshmi; Editing by Joseph Radford)

Previous A Sanbàpolis Daniele di Bonaventura sullo schermo e dal vivo
Next 700Mhz Auction: The other side of the spectrum